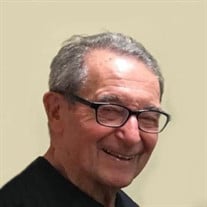 Allan's graveside funeral service will be livestreamed Sunday, January 10 at 1:30 pm via this link: https://client.tribucast.com/tcid/19070555 WORCESTER - On January 7th, 2021, Allan Hersh sadly passed away at the age of 89, a victim of Covid-19. A proud father, grandfather and great grandfather, Allie leaves behind three children, Stephen and his wife, Dana, Andrea and her husband Joel, and David and his wife Holly. He also leaves grand children Jacob, Noah, Caleb, Eli, Sam, Rebecca, and Benjamin, and great grandchildren, Asher, Desmond, Eliot and Rose. In addition he leaves his beloved wife of 27 years, Sandra, and doting nieces, nephews, cousins and loyal friends, many of who were in his life from childhood until the day he died, including Nick and Arnie. Allie was born and grew up in Worcester to Ann and Samuel Hersh, Allie was the third child along with his beloved sister Barbara and brother David who predeceased him. Allie was always excited about his next move - from Worcester to Cape Cod to Florida, back to Worcester, and finally settling in Albany close to his daughter. Allie loved people. He was gregarious and funny and made best friends wherever he went, from his deli customers, to the nursing home assistants where he finally lived. Allie worked and was an eventual co-owner of The Boston Beef Company in Worcester. After that he became a meat entrepreneur, opening Falmouth Beef and Deli with his brother and later opening Allie’s Deli in Sarasota, featuring his signature sandwich, the “It-Allie.” Socially conscious and deeply caring, Allen never hesitated to help his fellow person in need. He was featured in a local Cape Cod newspaper when, after the death of a friend, he decided to stop selling cigarettes at his deli, hanging a sign that read, “We no longer sell cigarettes here because we like you.” Allie had many interests. As a boy, he had a passion for pigeons. He raised and trained homing pigeons on the roof of his Worcester home, entertaining his family with pigeon stories. He loved making clay sculptures, playing the drum to jazz, beating his family in Gin Rummy and Cribbage, and traveling. Although he was a meat lover, he later became more health conscience. He was a runner, a golfer, a fisherman, a skier, and an avid swimmer, especially at the JCC in Worcester. Allie served his country in the army during the Korean War. Private funeral services will be held at 1:30PM on Sunday, January 10th in B’Nai Brith Cemetery in Worcester under the direction of Richard Perlman of Miles Funeral Home of Holden. For live streaming please check Allan’s obituary on the funeral home website. Donations may be sent to: The Food Pantries for the Capital District – thefoodpantries.org The Ossining Food Pantry -- ossiningfoodpantry.org/donate/ Worcester County Food Bank – foodbank.org To share a memory or offer a condolence please visit "The Tribute Wall."

Allan's graveside funeral service will be livestreamed Sunday, January 10 at 1:30 pm via this link: https://client.tribucast.com/tcid/19070555 WORCESTER - On January 7th, 2021, Allan Hersh sadly passed away at the age of 89, a victim of Covid-19.... View Obituary & Service Information

The family of Allan Hersh created this Life Tributes page to make it easy to share your memories.

Send flowers to the Hersh family.