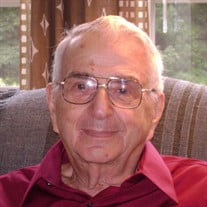 Please click this link to view Allen's Graveside Service: https://client.tribucast.com/tcid/86027445 SHREWSBURY - Allen A. Cramer, age 95, died peacefully at home on October 15, 2020. Allen was an honest man who taught by example, and a happy man who enjoyed life and his family. Allen was born in Worcester and graduated from Classical High School. Just before graduation, he enlisted in the US Army, but had to wait for a month, until he was 18 years old, to be called to active duty. He served in the infantry as a rifleman with the 11th Armored Division. He was wounded in The Battle of the Bulge, in Belgium. After a hospital stay, he returned to his outfit. They were the first troops to enter and liberate Gusen Concentration Camp in Austria just as the war in Europe was coming to an end. Allen was awarded The Purple Heart Medal, The Bronze Star Medal, the Combat Infantry Badge, and 3 battle stars. While a student at Harvard University, Allen married the love of his life, Natalie Broder. After graduation, he joined his father in the Louis H. Cramer insurance agency, retiring in 1985. He served as Worshipful Master of Matthew John Whittall Lodge of Masons and as District Deputy Grand Marshal. He also served as President of The Worcester Insurance Society. Allen enjoyed dancing with Natalie, including square dancing. He was an avid swimmer and an avid HAM radio operator. In retirement, Allen and Natalie traveled the U.S. extensively, driving to all 48 lower states. Allen is survived by his beloved wife of 73 years, Natalie Cramer; their sons, Michael Cramer and his wife Marsha, and Zak Cramer and his wife Susan; grandchildren, Melanie Cramer, and Matthew Cramer and his wife Kaylee; great-grandchildren, April Cryan and Logan Cramer; and his brother, Russell Cramer. The family would like to thank everyone at The Residence at Orchard Grove for making his last days so wonderful. Memorial donations may be made to Rachel’s Table, 633 Salisbury Street, Worcester, MA 01609, or to a charity of the donor’s choice. The family will hold a private graveside service.

The family of Allen A. Cramer created this Life Tributes page to make it easy to share your memories.

Send flowers to the Cramer family.