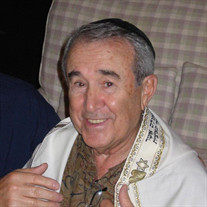 WORCESTER- Arthur Louis Herring age 95, a resident of Palm Beach Gardens, FL formerly of Worcester died on Wednesday, December 9, 2020, in White Plains, NY. He is predeceased by his wife Ruth, of 58 years in May of 2020, as well as, his son Zachary in January 1993, his daughter Abby in September of 2019, and his grandson, Nathan in May 2018. He is survived by his son Jonathan, his daughter Debbie Spiro, son-in-law Marc Spiro, grandson Perry Spiro, granddaughter Jennifer Aisenberg, and his sister Marilyn Adelman. In September 1939, at 14 years of age, Arthur and his family left a small village in Lithuania and boarded the last ship leaving Cherbourg before war broke out in Germany. The family the Herrings left behind in Europe all perished in the Holocaust. The Herrings immigrated to the US and settled in Worcester where some of their family had already immigrated several years before. It was a huge adjustment for him coming from a place with no running water and not speaking a word of English. In 1952, at age 27 Herring founded Modern Manufacturing of Worcester. He worked tirelessly building his window business. By 1971 he had 275 employees and was honored with the Small Businessman of the Year Award by the Worcester Chamber of Commerce. Today the Herring family still owns the buildings that are home to Modern Mfg. and Rotmans Furniture. “Herring was an unusually humble man,” said Rabbi Fogelman of Central Massachusetts Chabad. He would hear of someone who had lost his job and would immediately look to find that person a new job. If he wasn’t successful he would often hire the person himself.” In the 1980s, along with his son Zachary, Herring built and donated the giant Menorah that still stands in Newton Square at Chanukah each year. “My dad’s warm, generous smile, and sense of humor could light a room.” According to his daughter Debbie, “he will be remembered as one of the kindest, sweetest men. Everyone I’ve ever met who’s known my dad always has the most beautiful things to say about him. I am proud to say he was my father.” My brother Jon said he heard someone once say “If I had a nickel for every good deed your father did, I would be a wealthy man.” He was laid to rest at a private family service in New Montefiore Cemetery in West Babylon, NY on Friday, December 11, 2020, under the direction of Richard Perlman of Miles Funeral Home of Holden. Memorial contributions may be made to Chabad of Central Massachusetts, 22 Newton Ave., Worcester, MA 01602, or to Chabad of Bedford, 100 South Bedford Rd., Suite 300, Bedford, NY 10549. For condolences please email [email protected]

WORCESTER- Arthur Louis Herring age 95, a resident of Palm Beach Gardens, FL formerly of Worcester died on Wednesday, December 9, 2020, in White Plains, NY. He is predeceased by his wife Ruth, of 58 years in May of 2020, as well as, his son... View Obituary & Service Information

The family of Arthur Louis Herring created this Life Tributes page to make it easy to share your memories.

Send flowers to the Herring family.