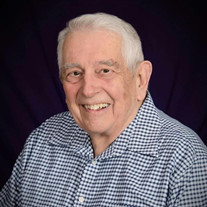 STERLING - Arthur “Ray” Perkins, age 87, passed away at Sunrise on Easter Morning, Sunday, April 17, 2022. Born on November 7, 1934, he was the son of the late Norman H. and Estelle (Girlie) Perkins. Ray was a resident of Sterling for almost his entire life. He attended the Butterick School in Sterling and graduated from Commerce High School in Worcester. He started working at an early age delivering milk for Lamarche Dairy, pumping gas at Eddie Morris’s Garage while learning the mechanic trade. A hard working man, Ray took pride in his work and family. His job as a mechanic for Table Talk Pies was the joy of his life especially when he worked alongside his father Norman. He worked at Table Talk Pies for over 24 years until the company closed for reorganization. Ray then took a position as Shop Foreman at Hayes Pump in Acton where he met his current wife, Jayne. Married for over 30 years, they enjoyed traveling, visiting relatives in Canada, spending time together at home working in the yard, gardening, bird watching, especially Cardinals and playing cribbage. Ray had many interests; he recorded daily events including weather, pollen, rainfall, grass mowing and more and kept countless diaries of his tasks. His grandmother taught him how to play the card game pitch at an early age and later he loved going card parties with her. After retirement, he played pitch at the American Legion on Wednesday afternoons for many years. He also was an avid cribbage player. Ray hardly ever missed the Sterling Fair or a parade in town. He was known to make the best homemade biscuits for strawberry shortcake season and his potato salad was always a hit and requested by family members for summer cookouts. Some of his favorite sayings were “He’s a good egg” or “That hit the Spot” after a delicious meal. He enjoyed family visits and loved teasing children and grandchildren and teaching them silly games, patting your head, and rubbing your belly at the same time. He played piano and sang “You are My Sunshine” to his children when they were young and has been a beloved song for the entire family over the years. As man of faith, Ray was raised Catholic and remained faithful to God his entire life. Ray leaves his loving family, his devoted wife and caretaker Jayne (Colburn) Perkins of over 30 years; his daughters, Nancy and her husband Don of Lancaster, Laurie and her husband Wayne of Princeton, Jeanne and her husband Bob of Ocean Pines, Maryland; and son in-law, Peter Bergeron of New Hampshire. He is reunited in heaven with his parents, Norman, and Estelle (Girlie), his son, James and his wife Cathy Perkins, his daughter, Heidi Bergeron and his sister, Gail Cunningham. He is survived by his sister, Estelle “Fay” Lovejoy of Rhode Island; his brother in-law and best friend Herbie Bingham of East Princeton; his grandchildren, Amy, Jessica, Ryan, Tonjaleca, Rashard, Jeremy, Kara, Lee, Jacklyn, Benjamin, Nicholas, Kelly, Miles, Kyle, Matthew, Haley, Hannah; over 20 great grandchildren; many nieces and nephews; his step-children, Wendy and husband Rob and their children, Timothy , Dann and Samantha, Darrin and wife Anne Marie, and daughters, Dannielle and Ashleigh; and his brother in-law, Bruce and his friend Katie as well as many other extended family and friends. Relatives and friends are invited to visit with Ray’s family from 9 to 11 a.m. on Saturday, April 23rd followed by an 11 a.m. service in the Miles Funeral and Tribute Center, 100 Worcester Road, Sterling. Burial will follow at Hillside Cemetery. In lieu of flowers, memorial contributions may be made to Hiram O. Taylor American Legion Post 189, 32 School Street, Sterling, MA 01564, or to the First Church in Sterling, with the memo LaRomana Mission, P.O. Box 40, Sterling, MA 01564. To share a memory or offer an online condolence, please visit www.milesfuneralhome.com To share a memory or offer an online condolence, please visit www.milesfuneralhome.com

The family of Arthur "Ray" Perkins created this Life Tributes page to make it easy to share your memories.

Send comfort and support when it's needed most.