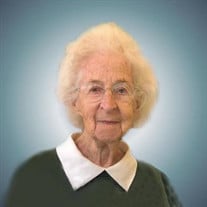 WORCESTER – Barbara A. (Webb) Pearson, loving mother, grandmother, great-grandmother, sister and friend to many, passed away peacefully at home in Worcester on Monday, December 21. She was 100. Barbara was born in Worcester, the daughter of Albert and Ruth A. (Anderson) Webb. She went on to graduate from Commerce High School and work as a Secretary for the Psychology Department at Worcester State College for many years. She was an active volunteer at the Holden Senior Center and longtime member of the Greendale People’s Church in Worcester. She was passionate about her homemade jams, many of which were made from fruits grown in her yard. She will be remembered for being strong willed, independent and competitive in nature. She will be lovingly missed by her daughter, Kristina Genovese and her husband, John of Swanzey, NH, a son, Russell Pearson and Patricia Lebish of Royalston; two grandchildren, Kate Chisolm and Stephanie Bleau; four great-grandchildren, Denali Bleau, Finley Bleau, Alex Chisolm and Thea Chisolm; many nieces nephews, friends; and her beloved cat, Gramma’s Kitty. She was predeceased by her loving husband, Stanley R. Pearson and her sister, Ruth Swenson. A funeral service honoring her life will be held privately. In lieu of flowers, memorial donations may be made to the Holden Senior Center, 1130 Main St., Holden, MA 01520 or to the Greendale People’s Church Memorial Garden Fund, 25 Francis St., Worcester, MA 01606. Funeral arrangements are under the care of Miles Funeral Home, Greater Worcester Funeral Care.

WORCESTER &#8211; Barbara A. (Webb) Pearson, loving mother, grandmother, great-grandmother, sister and friend to many, passed away peacefully at home in Worcester on Monday, December 21. She was 100. Barbara was born in Worcester, the daughter... View Obituary & Service Information

The family of Barbara A. (Webb) Pearson created this Life Tributes page to make it easy to share your memories.

Send flowers to the Pearson family.