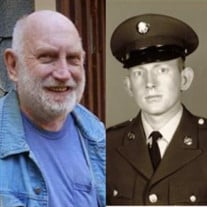 WORCESTER – Barry Shutter, age 76 died on Thursday, December 16, 2021, surrounded by his daughters and best friend after a short battle with lymphoma. Barry was born in Reading, PA, the son of Ethel (Shingle) and William Shutter. Barry proudly served his country in the U.S. Army during the Vietnam War as a staff sergeant, an honor in which he took great pride. Prior to his deployment to Vietnam, Barry married Marlene (Mowshowitz). Upon his return home from the war, they settled in Leicester, where they started a family and raised their daughters. He further continued his support of the military as a member of the American Legion. Barry will be lovingly missed and remembered by his daughters, Aviva Belhumeur and her husband, Richard of Auburn and Elise Busnach and her husband, George of Thetford Center, VT; his sweet grandchildren, Moses, Georgie, and Sophia; his sisters Diane Smithers of Albany, NY and Lucille Essig and her husband, Dennis of Shartlesville, PA: his best friend Gary Chase and his wife Donna, his nephews and nieces. He was predeceased by his wife of 27 years, Marlene (Mowshowitz) Shutter who died in 1995. Working many years as a chef and dabbling in farming, Barry imbued his daughters with a strong work ethic and a commitment to a job well done. He tinkered in gardening and boasted about his summer tomato crop, offering tips to his daughter, even when she wouldn't listen. He loved the outdoors and enjoyed his leisure time, hunting and fishing. Fondly nicknamed “The Original Mountain Man” by his nephews, he especially enjoyed his time at the Berks Hunting Camp spending time with his family, exploring the mountainside and relishing in the simple beauty of nature. Barry’s family will gather privately for services. Arrangements are under the care of Miles Funeral Home of Holden. The family would like to thank the staff of the St. Francis Rehabilitation and Nursing Center for their care and support over the past few months. Memorial Contributions may be made to Project New Hope, 70 James St #157, Worcester, MA 01603 or a charity of the donor’s choice.

WORCESTER &#8211; Barry Shutter, age 76 died on Thursday, December 16, 2021, surrounded by his daughters and best friend after a short battle with lymphoma. Barry was born in Reading, PA, the son of Ethel (Shingle) and William Shutter. Barry... View Obituary & Service Information

The family of Barry Shutter created this Life Tributes page to make it easy to share your memories.

Send flowers to the Shutter family.