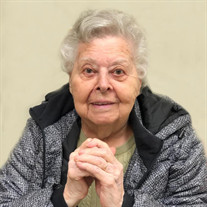 HOLDEN – Bernice T. (Cournoyer) Faneuf, a loving wife, exceptional mother, grandmother, great-grandmother and best mother-in-law ever, passed away from complications of Covid-19 at The Overlook in Charlton on Friday, November 27. She was 97. Born in Holden, the daughter of Hector and Leah (Berard) Cournoyer, Bernice graduated from Holden High School. Soon after, she met the love of her life, Jean Faneuf, who had just returned from war. The couple soon married and raised their family in Holden. Early in her career, Bernice worked in the cafeteria at Rice Elementary School in Holden before becoming an Office Manager at R and A Machine in Worcester. She had a green thumb whether growing violets in her house, tending to her multiple flower gardens in the back yard or her large vegetable garden. She enjoyed working her backyard immensely. After her retirement, she traveled all over the world to Africa, Austria, Aruba, and Alaska. As many knew, Bernice was a seasoned craps player. She loved using her skill on her many adventures at the casino. When it came to sports, she was so dedicated she could name every player on her favorite teams and many more throughout the NFL and MLB. To say the least, she was an avid Patriots and Red Sox fan. In her later years, she became a seasoned birdwatcher and displayed her artistic talent through her many sketches. Furthermore, she enjoyed reading and doing crossword puzzles with her sisters. She is survived by her two sons; Allan Faneuf and his wife, Susan of Sturbridge and Raymond Faneuf and his companion, Sheila Sullivan of Salisbury; six grandchildren, Julie Keefe and her husband, Kevin of Rutland, Amanda Morgan and her husband, Richard of Fairfield, CT, Rebecca Gersbacher and her husband, Thomas of Worcester, Nathan Faneuf and his wife, Krysta of Aiken, South Carolina, Colleen LeClair and her husband, Eric of Sturbridge and Bryan Faneuf of Putnam, CT; her great-grandchildren, Patrick, Aidan, Jack and Aislinn Keefe, Emmylou and Becket Morgan, Grace and Oliver Gersbacher; Louie Faneuf and Alexis LeClair. She was predeceased by her loving husband of 71 years, Jean L. Faneuf, who passed in 2017; five brothers, Alfred, Leonard, her twin brother Bernard, Henry and Raphael Cournoyer; and by two sisters, Permelia Hendrickson and Loretta Ballotte. A graveside service honoring her life will be held at a later date at Worcester County Memorial Park. In lieu of flowers, memorial donations in her name may be made to the Wounded Warrior Project, P.O. Box 758516, Topeka, Kansas 66675-8516. Funeral arrangements are under the care of Miles Funeral Home, Greater Worcester Funeral Care.

HOLDEN &#8211; Bernice T. (Cournoyer) Faneuf, a loving wife, exceptional mother, grandmother, great-grandmother and best mother-in-law ever, passed away from complications of Covid-19 at The Overlook in Charlton on Friday, November 27. She was... View Obituary & Service Information

The family of Bernice T. Faneuf created this Life Tributes page to make it easy to share your memories.

Send flowers to the Faneuf family.