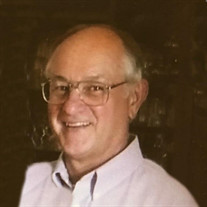 SPENCER – Bertram A. Nicholas, Jr., 76, passed away peacefully at home on Friday, July 2, 2021 after an illness. He was born and raised in Clinton, the son of the late Bertram A., Sr. and Myrtle (Bufton) Nicholas and had lived in Medway and Maryland before moving to Spencer nineteen years ago. He leaves his loving wife of 31 years, Jean A. (Richards) Nicholas; his son, Bertram A. Nicholas III of Spencer; his daughters, Katrina Nicholas of Plainville and Margaret Nicholas of Mansfield; his step-daughter, Anne Smith of Lancaster, PA; his step-son, Michael Subelsky of Baltimore, MD; his grandchildren, Alex, Jack, Julia, Kaley and Ayla; his great-grandson, Lincoln; his sisters, Betty June Nicholas and Mary Lou LaShomb both of Clinton; and three nephews. He was predeceased by his sister, Nancy McElheney. Bert graduated from Mass College of Pharmacy in 1969 and received his doctorate in education from Northeastern University in Boston in 1988. He was commissioned in the U.S. Army as a Captain in 1969 and served his country for 32 years before retiring in 2004 with the rank of Colonel. Bert taught at Mass College of Pharmacy in Boston and Worcester, Howard University in Washington, DC and retired from the University of St. Joseph in Hartford, CT. He was a longtime member of Boston Druggists Association and enjoyed gardening, waterskiing on the lake, spending time with his family and traveling. Relatives and friends are invited to attend calling hours from 4 to 7 p.m. on Thursday, July 8th in the Miles Funeral Home, 1158 Main Street, Holden. Funeral services for Bert will be held on Friday, July 9th at 11 a.m. in the funeral home. A private committal service will be held at a later date. In lieu of flowers, memorial contributions may be made to Dana-Farber Cancer Institute, P.O. Box 849168, Boston, MA 02284-9168, or a charity of one’s choice. To share a memory or offer an online condolence, please visit "The Tribute Wall."

SPENCER &#8211; Bertram A. Nicholas, Jr., 76, passed away peacefully at home on Friday, July 2, 2021 after an illness. He was born and raised in Clinton, the son of the late Bertram A., Sr. and Myrtle (Bufton) Nicholas and had lived in Medway... View Obituary & Service Information

The family of Bertram A. Nicholas, Jr. created this Life Tributes page to make it easy to share your memories.

Send flowers to the Nicholas, family.