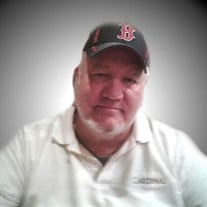 Leicester - Brad Scott Allen, 62, passed away unexpectedly Monday, September 20th, 2021, after a sudden illness. He is survived by the love of his life, Debra Lipka. He leaves his Mother, Betty O. Allen of Virginia Beach, VA. and predeceased by his Father, Scott L. Allen. Brad was a long-time resident of Leicester, MA and beloved by this Community. His family was; sister, Wendy and Bruce McDonald, of Greenwood, SC; sister, Susan and Russell Mallard, of Holden, MA; brother, Douglas (DJ) and Jeanne Allen, of Virginia Beach, VA.; and brother Wayne and Merrilee Allen, of Spencer, MA and Tuscon, AZ.; his stepdaughter, Jaqueline Gregorie and his granddaughters, Tori and Madison. And was predeceased by his beloved dog, Luuka, who was always by his side. Additionally, many friends who knew him as a role model after losing their fathers. Brad worked at the Pine Ridge Country Club for the past 17 years as a member of the Grounds crew and became the Superintendent of Grounds. The Pine Ridge employees became his family and his DNA is a part of this golf course. He also worked as a Bartender for several local businesses; Sons of the American Legion Post 443, Hennessey’s, the Lithuanian Club and the Blarney Stone. He was a member of the Fraternal Order of Eagles in Leicester. He was a driver for many years for Worcester Limo. He also had a stint in Reforestation in Oregon. His gregarious personality made him a favorite to all who knew him. He enjoyed golf, going to concerts, good food, the Red Sox and Patriots, beverages and traveling to Florida and California on his off-season to visit friends. His musical career got it’s start as lead singer and founder of Buckland Edge and then the lead singer with the LaChapel Band. A Memorial Service will be held on Sunday, October 10th, at the Pine Ridge Country Club, 28 Pleasant Street North, Oxford, MA. at 11:00 am. All are welcomed to attend and celebrate Brad’s life. A GoFundMe page has been set up to help defer medical expenses. Arrangements are under the care of the Miles Funeral Home, 1158 Main Street, Holden. To share a memory or offer an online condolence, please visit "The Tribute Wall" on this page.

Leicester - Brad Scott Allen, 62, passed away unexpectedly Monday, September 20th, 2021, after a sudden illness. He is survived by the love of his life, Debra Lipka. He leaves his Mother, Betty O. Allen of Virginia Beach, VA. and predeceased... View Obituary & Service Information

The family of Brad Scott Allen created this Life Tributes page to make it easy to share your memories.

Send flowers to the Allen family.