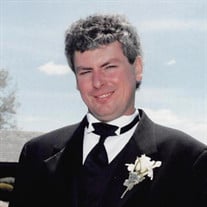 HOLDEN - Bruce Joseph Girard, 58, passed away peacefully with his family by his side on Wednesday, July 14, 2021 at UMass Memorial Medical Center-University Campus, Worcester after a period of declining health. He was born in Worcester, the beloved son of Joseph and Lois (Henderson) Girard and grew up in Shrewsbury. Bruce graduated from St. John's High School with the class of 1981 where he was a proud member of the crew team. He went on to earn a Bachelor's Degree in Business Management from Worcester State University and worked as a Transportation Supervisor at Shaw's Supermarkets for many years. Bruce later worked as a Property Manager for Salisbury Management and other local property management companies. He was a skilled carpenter who enjoyed working with his grandfather, the late Joseph Girard Sr. of Shrewsbury. Bruce's life was centered on faith, family and friends. He met his wife, Susan M. (Roy) through mutual friends and they lived in Worcester for a time before settling in Holden. Bruce was a loving and adoring husband and he and his wife, Sue shared the last 22 years together, raising their two daughters, Rachel and Julia. Bruce was an avid outdoorsman. As a young man, he enjoyed water-skiing on Lake Quinsigamond and snow-skiing in the mountains of Vermont. He also enjoyed fishing on Cape Cod with his friends. He was a lifelong devoted fan of the Bruins and Patriots. Bruce was a gentle man with a big presence and great sense of humor. He was extremely proud of his daughters and loved watching them play soccer, cheering them on at numerous games and tournaments throughout the years. Bruce will be lovingly missed and remembered by his wife, Susan; his daughters, Rachel and Julia Girard; his mother, Lois Girard of Mashpee; his father, Joseph Girard and his wife, Tricia of Hudson; his sisters, Susan Adams and her husband, Colin of Shrewsbury and Michelle Jewers and her husband, William of Shrewsbury; his mother-in-law, Julia Roy of Paxton; his brothers-in law, Robert Roy and his wife, Christine of Sutton and John Roy and his wife, Cindy of Worcester; and several aunts, uncles, nephews, nieces and cousins. He was predeceased by his father-in-law, Robert Roy Sr. of Paxton. Relatives and friends are invited to attend a Mass of Christian Burial, honoring and celebrating Bruce's life, at 10 a.m. on Tuesday, July 20, 2021 at St. Columba Church, 10 Richards Ave., Paxton. Burial will follow at Worcester County Memorial Park, 217 Richards Ave., Paxton. In lieu of flowers donations may be made to the Girard Educational Trust in care of Leominster Credit Union (Holden Branch), 715 Main Street, Holden, MA 01520. Funeral arrangements are under the care of Miles Funeral Home, 1158 Main Street, Holden.

HOLDEN - Bruce Joseph Girard, 58, passed away peacefully with his family by his side on Wednesday, July 14, 2021 at UMass Memorial Medical Center-University Campus, Worcester after a period of declining health. He was born in Worcester, the... View Obituary & Service Information

The family of Bruce Joseph Girard created this Life Tributes page to make it easy to share your memories.

Send flowers to the Girard family.