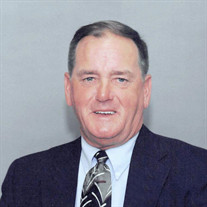 HOLDEN - Carney T. Clary, age 83, passed away June 26, 2021 with members of his family by his side. He was born in Worcester, the only son to George C. and Helaine (Pinksee) Clary on January 18, 1938. He grew up in the Grafton Hill section of Worcester and was educated in Worcester schools. He enlisted in the U.S. Army, taking his training in New Jersey and Missouri. He was stationed at Fort George G. Meade in Maryland. On November 1955 he was deployed to the 24th Infantry Division in South Korea, where he served 16 months with the H & S Company Section S-3 3rd Engineering Battalion. While in the military he completed his education under the USAFI Program. He returned to the states where he was stationed at Fort Belvoir, Virginia where he was honorably discharged. He was employed by the Eastern Oil Delivery Service. He met the love of his life, Sheila Mary Haran and they were married on September 15, 1962 in St. Stephen’s Church by Sheila’s uncle, Rev. John Haran, S.J. Together they raised their family, Thomas Michael, John Francis and Cathleen Anne and their families, Cailin Helaine, Kellie Elizabeth, Kevin Joseph and Jessica Lynne, Lauren Mary and Brandon Carney Thomas and his first great grandchild, Colton Edward Clary. He leaves a sister, Jane Tomaielo of Auburn. He was predeceased by sisters Judith Breton and Susan Clary. He also leaves many nieces and nephews. On May 10, 1964 he was appointed to the Worcester Police Department. His assignments were Foot Patrol, Motor Patrol, Detective Bureau, Burglary Task Force, Operations and his last 18 years with the Traffic Division, retiring January 2003. After retirement he worked security for Rotmans Furniture in Worcester. He continued to attend all air shows in the New England area. A private funeral service was held at the Miles Funeral Home, 1158 Main St., Holden, with burial following in Hope Cemetery, Worcester. In lieu of flowers, donations may be made to Veterans Inc., 69 Grove Street, Worcester, MA 01605. To share a memory or offer a condolence please visit "The Tribute Wall."

HOLDEN - Carney T. Clary, age 83, passed away June 26, 2021 with members of his family by his side. He was born in Worcester, the only son to George C. and Helaine (Pinksee) Clary on January 18, 1938. He grew up in the Grafton Hill section... View Obituary & Service Information

The family of Carney T. Clary created this Life Tributes page to make it easy to share your memories.

Send flowers to the Clary family.