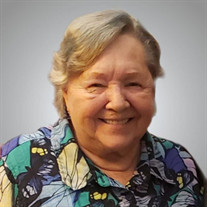 PAXTON – Carol J. (Zuranski) Goodrich, 82, passed away after a brief illness on Friday, January 15, 2021, at the Heywood Hospital in Gardner. She was the beloved wife of the late Frederick G. Goodrich who passed away in 2013. Born in Worcester and raised in West Boylston, she was a daughter of Joseph W. and Irene R. (George) Zuranski. In 1956, Carol was among the first graduating class of Wachusett High School. Carol and Frederick were married in 1960 and settled in Paxton where together they raised their large family. She always remained true to her Catholic beliefs and walked the walk. Carol was an active member of her community and remained active in organizing game nights and arts and crafts for her neighbors and friends. In her younger years she enjoyed square dancing with her husband as well as antiquing, cooking and was an avid gardener who could tell you every bloom, tree and bush, as well as how to care for them. Carol was a talented baker and decorated many delicious wedding and birthday cakes for friends and family. She loved camping with extended family. She was feisty, quick-witted and funny. Carol held various positions throughout her career, including managing the Meals on Wheels program and dining services for the Council on Aging of Paxton and she was an administrative assistant to the Dean of Students at Anna Maria College and WPI. She revered being of service to others. Most of all she was a devoted wife, mother, and grandmother. She will be lovingly missed and remembered by her three sons, Steve Goodrich and his wife, Shelley Duncan of VA, Fred M. Goodrich and his partner, Tommy Webb of New Orleans (her “boys”) and Andrew Goodrich of Rutland; her two daughters, Monica Goodrich-Pelletier and her husband, Kevin of Holland and Robyn Irving and her husband, Ronald of Athol; a sister, Gloria Ludden of FL; six grandchildren, Ryan (and his partner Alexa-Rose), Haley, Amber, Zoey, Christopher and Alexander; one great-grandchild, Ryder; and many beloved cousins, nieces and nephews. In addition to her parents and her husband of 53 years, Frederick, she was predeceased by her sister, Janet Whitcomb and her brother Joseph W. Zuranski Jr. Carol’s family will gather privately for a memorial service honoring her life. The service will be live-streamed at 11:00 am on Tuesday, January 26, at this link: https://client.tribucast.com/tcid/48164995.

PAXTON &#8211; Carol J. (Zuranski) Goodrich, 82, passed away after a brief illness on Friday, January 15, 2021, at the Heywood Hospital in Gardner. She was the beloved wife of the late Frederick G. Goodrich who passed away in 2013. Born in... View Obituary & Service Information

The family of Carol J. Goodrich created this Life Tributes page to make it easy to share your memories.

Send flowers to the Goodrich family.