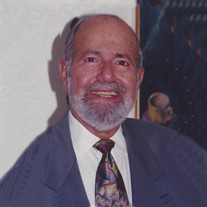 To view Charlie's service, please click this link: https://client.tribucast.com/tcid/46457044 Charles (Charlie) Ritz, 93, a devoted father, a dedicated grandfather, and a lifelong lover of music and the arts, died Saturday in his Cambridge home. He was born in Worcester on Jan. 7, 1927, son of Ann and Benjamin Ritz. His father was proprietor of Slonimsky & Ritz, a kosher delicatessen that was a landmark for the Jewish residents of Worcester, and Charlie often worked there while attending Classical High School. In 1945 he entered the Army and served for two years in Military Government in Germany, being discharged as a sergeant. He graduated from Worcester Junior College in 1949 and became a salesman, first with The R&R Plumbing Supply, and then The Stewart Hall Chemical Company, a tennis racquet always in his car. In 1979 he established the Light and Lovely Fitness Center in Wellesley and was proprietor of the popular women’s exercise facility until his retirement in 1991. He was an unfailing supporter of Israel and a lifelong student. In 1992 he graduated from Hebrew College with an associates degree and then undertook the intensive two-year Me’ah Program in Jewish Studies at the college. For the past 29 years he has been an active participant at the Harvard Institute for Learning in Retirement, in which he has taught a course on “The 3000-Year History of Jerusalem.” Charlie was a member of the Worcester post of the Jewish War Veterans. He had seats at “Symphony” for more than 60 years, was a longtime patron of the Boston Chamber Music Society, and attended Sunday concerts at the Isabella Stewart Gardner Museum and the filmed productions of the Metropolitan Opera. He was predeceased by his beloved wife, Isa Hurowitz Ritz, who died Feb. 9, 1990, and by his sister and brother-in-law, Lillian Ritz Spiegel and Maurice Spiegel, of Worcester. Beyond any other interest was the joy and fulfillment he received from his family. His daughter and son-in-law, Carey Goldberg and Steven (Sprax) Lines, of Brookline, had two children: Tulliver (Tully ) Lines and Liliana Lines, and Charlie, retired, lent a hand. Over the next 15 years, taking the kids to and from school and appointments developed into countless visits to museums, plays, concerts, ballets, hitting a tennis ball back and forth, a long weekend at Tanglewood, watching the Boston Celtics, and many quiet talks that will remain with them long after the life of the beloved man they called Zaidie. Charlie also leaves his daughter Morgan Ritz, of Watertown; his son and daughter-in-law, Brett Goldberg and Eve Berenblum Goldberg of South Egremont, MA.; and his granddaughter Isa Goldberg of Tel Aviv, Israel. Charlie had a number of close friends, among them several who have cherished him since they were boys together in Worcester. His favorite pieces of music, both by Schubert, were Adagio in E flat, D.897 “Notturno,” and Sonata for Arpeggione and Piano in A Minor. They would have been played at his funeral were there not a pandemic. You can listen to them here: https://www.youtube.com/watch?v=mlZvZQ5cKpc and here: https://www.youtube.com/watch?v=7qUd3cLeFqQ and think of Charlie. In lieu of flowers, donations may be made to The Cat Connection: https://thecatconnection.org/donate/make-a-donation/ Because of COVID-19, the funeral will be family only. To share a memory or offer a condolence please visit "The Tribute Wall."

To view Charlie's service, please click this link: https://client.tribucast.com/tcid/46457044 Charles (Charlie) Ritz, 93, a devoted father, a dedicated grandfather, and a lifelong lover of music and the arts, died Saturday in his Cambridge... View Obituary & Service Information

The family of Charles (Charlie) Ritz created this Life Tributes page to make it easy to share your memories.

Send flowers to the Ritz family.