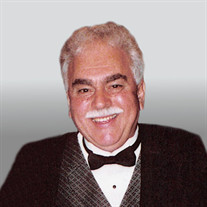 HOLDEN - Charles E. Esoian, 83, passed away on Sunday, October 31, 2021 at UMass Memorial Healthcare in Worcester after lengthy illness. Born in Harford, CT, and raised in Worcester, Charlie was the son of Armenian immigrants, Edward C. and Agnes (Danielian) Esoian and lived the last 38 years in Holden. Charlie graduated from Commerce High School in Worcester and later from Worcester Junior College. After college, Charlie enlisted in the National Guard, where he met one of his closest friends Ray Perrotta, and enjoyed competitive shooting before being honorably discharged. As a youngster, Charlie spent most of his time at his grandmother's farm on the Worcester/West Boylston town line and later worked at their fruit stand and market. After operating the market for several years, Charlie opened "Eddie's Liquors" at the same location on West Boylston Street, which he owned and operated until retiring in 1979. After his retirement, Charlie married Donna and they built a home in East Dennis where they lived for several years and welcomed their son Edward. They then moved to Holden, where Charlie worked as a land lord and started a custom home building business. Charlie was an avid hunter and fisherman. Some of Charlie's fondest moments were the times spent hunting with his nephew, Rodney and fishing with his son, Eddie. Whether hunting together in the back woods of Massachusetts, or fishing country ponds and brooks, they shared a unique bond and friendship. In 2003, Charlie, his close friend, Marcel, and Eddie built a cabin in Pulaski, NY where they made many memories and shared endless stories around the campfire. Charlie will be lovingly remembered for his infectious laugh, hard work ethic, and unconditional loyalty to close friends and family. He was a devoted husband and extremely proud father, who spent countless hours being an amazing father to his pride and joy, Eddie. Charlie is survived by his beloved wife of 42 years, Donna M. (Gerolomo) Esoian; a son, Edward C. Esoian of Worcester; and many nephews and nieces including, Rodney Miller and his wife, Lisa of Leicester and their children, Nicholas and Shelby, and Debbie Wilga and her husband, Danny of Philipston. Relatives and friends are invited to visit with Charlie's family from 5 to 7 pm on Friday, November 5, at Miles Funeral Home, 1158 Main St., Holden. A memorial service honoring Charlie's life will be held at 11 am on Saturday, November 6, at the Armenian Church of Our Savior, 87 Salisbury St., Worcester. To share a memory or to offer a condolence, please visit the "Tribute Wall" on this page.

HOLDEN - Charles E. Esoian, 83, passed away on Sunday, October 31, 2021 at UMass Memorial Healthcare in Worcester after lengthy illness. Born in Harford, CT, and raised in Worcester, Charlie was the son of Armenian immigrants, Edward C. and... View Obituary & Service Information

The family of Charles E. Esoian created this Life Tributes page to make it easy to share your memories.

Send flowers to the Esoian family.