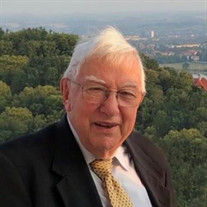 PAXTON - Christian (Chris) S. Baehrecke, 92, of Paxton, MA passed away on May 31, 2022. Pre-deceased by his beloved wife, Ingeborg in 2019, he is survived by his daughter, Astrid Baehrecke, her husband Kevin Ring, and granddaughter Audrey, son Eric Baehrecke, and grandsons Owen and Ansel, Eric’s fiancée Ania Woloszynska and daughter Nina, as well as extended family in the US, numerous relations and acquaintances in Germany with whom he kept in close contact, and a multitude of local friends. Calling hours will be held at Miles Funeral Home, 1158 Main Street, Holden, MA, on June 16 from 5-7 pm. A private celebration of Chris’s life will be held at Trinity Lutheran Church on June 19. In lieu of flowers, donations may be made in Chris’s memory to Mechanics Hall, Community Healthlink, or to a charity of one’s choosing. Christian Siegfried Baehrecke was born November 29, 1929, in Dresden, Germany, the third son of Arnold Baehrecke and Gertrud Schirmeister. As a child and young man he lived in the eastern suburb of Bühlau just outside of the Saxon capital. Chris attended high school at the Staatsgymnasium and completed his Abitur exam at the Kreuzschule Dresden in 1950. He lived through the Dresden air raid in 1945 and following the Second World War was unjustly interned for three years in a Russian prisoner of war camp. Fleeing the soviet-occupied zone of his homeland, Chris applied for immigration to the United States. An interest in building construction led him to apprentice in carpentry. He became a journeyman before leaving for the United States in 1952. He then joined his Aunt’s family, the Garrisons, in Boston. Soon after his arrival in Massachusetts, Chris began his studies in civil engineering at Worcester Polytechnic University (WPI) graduating with a B.S. in 1956. Threatened with military service during the Korean War, he volunteered for ROTC courses offered at WPI. Upon becoming a US citizen in 1957, Chris received his commission as an officer in the US Army Corps of Engineers rising to the rank of captain. His active duty with the army reserve ended in 1965. In 1957 he married his love, Ingeborg Wendsche in Berlin-Dahlem. Chris had been friends with Inge since 1945. As a young couple, Chris and Inge first lived near Washington, DC, then in Worcester until 1960, eventually buying land and building their home in Paxton where they lived 62 years of their happy marriage. Their daughter Astrid was born in 1958, followed by son Eric four years later. Following his WPI graduation in 1956, Chris joined the fifty-year-old Worcester building construction/engineering firm, R.L. Whipple where he worked for his entire career. With his state registration as a professional engineer, Chris was involved in all operations of the company, rising to become its president for nearly two decades, before stepping back from active management in 1994. He remained a consultant with the company for its final twenty years. During his professional career, Chris had lead responsibility for several award-winning building projects. This resulted in the firm’s state certification for work on historic building restorations, older structures upgraded to modern requirements, or their adaptive reuse. He was involved with Atwood Hall, the theater building at Clark University, Whitcomb and Tuckerman Halls, the Higgins Residence of American Antiquarian, all in Worcester, and the Gough House in Boylston. Most prominently his work on the AIA award-winning renovation of Worcester’s 1857 Mechanics Hall, where Chris led the initial restoration in 1976, followed by many years of work on further upgrades was a source of tremendous pride. In 2006 Mechanics Hall recognized Chris’s continued care by awarding him its Master Mechanics award and Life-time honorary trusteeship. In 2011 the Commonwealth of Massachusetts honored Chris for his 55 years of service to Whipple Construction. Worcester’s mayor gave him the ceremonial key to the city. Chris’s expertise was sought by many organizations, and he was active in volunteer service. For nearly sixty years, Chris stayed involved with the Alpha Tau Omega (ATO) fraternity from his WPI student days, its home then located on Institute Road. Following graduation Chris was elected president of the Gamma Sigma alumni and was integral in the purchasing and remodeling of a much larger property for its student members on Regent Street. For over fifty years Chris served the town of Paxton. He was on the Finance, Appeals, Building and Master Plan committees and worked as an Assessor, Planner, and Selectman, serving as chairman in many of these positions. As Paxton’s representative to the Central Massachusetts Regional Planning Council, Chris was appointed its president during his 15-year tenure. Chris’s interest in mental health led to his 35 years as a board member at Community Healthlink. He was elected its president and chairman for five years. He also served as director of Yarock Memorial Housing until 2018. He further volunteered at his church, Trinity Lutheran, serving on the council and various committees. He also served on Preservation Worcester, as a trustee of the Elm Park Center, and at Anna Maria College, as a board member of Worcester’s Lutheran Home, YWCA, and Devereux Foundation, and at Jeremiah’s Hospice. He was a panelist of the American Arbitration Association, and a volunteer of the American Service Corporation. He ended his volunteer service in his mid-eighties. Nothing was more important to Chris than spending time with his family and friends. Chris and Inge visited their homeland and family abroad over twenty times. Following the loss of his dear wife in 2019, Chris visited Dresden in celebration of her life for a final time. Chris and Inge enjoyed vacations on the outer beaches of Cape Cod, in the serene White Mountains of Jackson, NH with the Garrison family, and further afield in the States, Bermuda, and Europe. Chris enjoyed gardening, photography, and classical music, in addition to his many professional interests.

PAXTON - Christian (Chris) S. Baehrecke, 92, of Paxton, MA passed away on May 31, 2022. Pre-deceased by his beloved wife, Ingeborg in 2019, he is survived by his daughter, Astrid Baehrecke, her husband Kevin Ring, and granddaughter Audrey, son... View Obituary & Service Information

The family of Christian S. Baehrecke created this Life Tributes page to make it easy to share your memories.

Send flowers to the Baehrecke family.