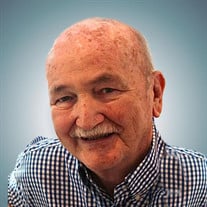 David's Funeral Mass will be livestreamed (depending on the service inside Church) on Tuesday, November 17th, at 10:00 am and will be available for viewing at this link: https://client.tribucast.com/tcid/16143761 WEST BOYLSTON/HOLDEN – David C. O’Connor, 76, passed away unexpectedly at home on Wednesday, November 11, 2020. Born and raised in Worcester, Dave was the son of John T. and Katherine T. (Cahill) O’Connor and lived 26 years in Holden and for the last 12 years in West Boylston. Dave was a graduate of St. Peter’s High School in Worcester, class of 1962. He served as class president for both his junior and senior years and was the varsity football captain his senior year. He later graduated from The College of the Holy Cross in 1966 and received a Master’s Degree in Education from Worcester State University. Dave continued his education while working and took further graduate courses at Clark, The Principals’ Center at Harvard, and UMass Amherst. Dave served for six years in the Massachusetts Army National Guard assigned to the 181st Engineer Company. He was discharged with the rank of Sergeant. Dave met his future wife, Deborah Clifford of Worcester while teaching at Burncoat Junior High School in Worcester. After a brief courtship they were married on June 21, 1969 at Our Lady of Rosary Church and lived several years in Worcester before moving to Holden where they raised their four children. Dave taught CCD at St. George’s in Worcester and volunteered for The Bishop’s Fund for many years. After retiring to Harwich, Dave dedicated his time volunteering at the Harwich Food Bank. Dave served in the Worcester Public Schools for 35 years as both an English teacher and administrator. He began his career in 1966 at Burncoat Junior High and later became English Department Head at Chandler Junior and Forest Grove. In the latter part of his tenure, Dave was an administrator at Forest Grove, South High School, and North High School where he finished his career in 2001. As an assistant principal, Dave managed to pull off the rare feat of being simultaneously respected, feared (mostly by kids), and loved. Dave was an ardent believer in the public school system and the opportunity it affords to all students. Dave’s life was centered on his family and his Catholic faith which guided him throughout his life. He was a devoted member of Our Lady of Good Counsel Church. Dave was immensely proud of his children and their many accomplishments including their education and career paths. He enjoyed coaching his children in both Holden youth baseball and softball. Dave spent over 20 years officiating Central Mass high school football games. He was equally at ease talking about poetry as he was about the Patriots. Loved by all who knew him, Dave was the consummate “great guy”. In his spare time Dave enjoyed playing cribbage, reading, following sports and spending time with Deb and family and friends at Angell Brook in West Boylston. In recent years he looked forward to family gatherings on the Cape. He will be lovingly remembered and missed by his beloved wife of 51 years, Deborah (Clifford) O’Connor; two sons, Sean M. and his wife, Kathleen of Goldens Bridge, New York and Kevin C. O’Connor of Worcester; two daughters, Elizabeth A. O’Connor and her companion, Ethan Brannon of Altadena, California and Sarah L. McSweeney and her husband, David of Norwell; a sister, Maureen Baldwin of East Falmouth; four grandchildren, James and Mairead O’Connor, and Audrey and Katherine McSweeney; and several nephews and nieces. Dave was predeceased by his brother Tim in 2008. Relatives and friends are invited to visit with Dave’s family from 4 to 6 pm on Monday, November 16, at Miles Funeral Home, 1158 Main St., Holden. A Funeral Mass will be celebrated at 10 am on Tuesday, November 17, at St. Peter’s Church, 931 Main St., Worcester, followed by interment at St. John’s Cemetery. (Proper social distancing and masks are required for attendance at both the visiting hours and funeral Mass.) In lieu of flowers, memorial contributions may be made in his name to the VNA Care Network at 120 Thomas Street Worcester, MA 01608 or The Worcester County Food Bank.

David's Funeral Mass will be livestreamed (depending on the service inside Church) on Tuesday, November 17th, at 10:00 am and will be available for viewing at this link: https://client.tribucast.com/tcid/16143761 WEST BOYLSTON/HOLDEN &#8211;... View Obituary & Service Information

The family of David C. O'Connor created this Life Tributes page to make it easy to share your memories.

David&#39;s Funeral Mass will be livestreamed (depending on the service...

Send flowers to the O'Connor family.