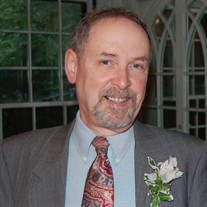 WARREN - Davison “Doc” Dalziel III, 77, of Warren, MA, formerly of East Brookfield, MA and Haymarket, VA, passed away on June 27th, 2021 after a brief illness. Born in Florida, Davison was the eldest of three children born to Colonel Davison Dalziel and Jean (Holden) Dalziel. As part of an Air Force Family, he spent his younger years in several different states. He attended high school and college in Arkansas, but moved to Virginia shortly thereafter. Davison lived most of his life in Virginia, where he worked for Arlington Trust Bank, then as a manager of a movie theater. But ultimately his career was in the furniture business where he worked for Hecht’s department store for many years. Davison loved helping people and was a natural conversationalist. He had a special brand of humor and was a master of delivering a joke with a straight face. Davison had a love of classic cars, cooking, and also his dogs. Over the years he adopted several rescue dogs, and each of them became a special companion. Davison also loved collecting in-flight magazines. He often implored vacationing family members to bring back magazines from interesting and far-flung airlines so he could add to his collection. After many decades in Virginia, Davison moved to Massachusetts to be closer to family. As he got older he enjoyed the slower pace of a simple life but still continued to work even in his later years. Davison was working as a driver for South Central MA Elder Bus until shortly before his passing. Davison was predeceased by his sisters, Madelyn Chain and Joan Straw. Davison is survived by his niece Olivia Straw and husband Daniel Murphy of Danvers; niece Hillary Stasonis and husband Chris Stasonis of North Andover; his cousin Susan Hunter of Stratham, NH and her children Laura Hunter, Debra Bonenfant, Alison Hunter, and John Hunter. Davison shared many happy years with Camilla Wenmohs and her children during their marriage and afterwards as dear friends. Davison will also be missed by his neighbors and friends in the Brookfields and beyond. A graveside memorial service for Mr. Dalziel will take place on Saturday, August 7th at 10:00am at Grove Cemetery, 1290 Main Street, Holden. Arrangements are under the care of Miles Funeral Home, 1158 Main Street, Holden. In lieu of flowers, donations can be made in Davison’s memory to MSPCA-Angell at www.mspca.org/donate-now.

The family of Davison "Doc" Dalziel III created this Life Tributes page to make it easy to share your memories.

Send flowers to the Dalziel family.