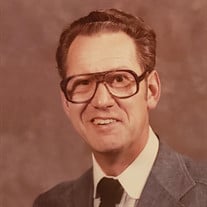 WORCESTER – Donald J. Berthiaume, loving husband, father, brother and grandfather, passed away peacefully on Wednesday, November 25, at the Holden Rehabilitation & Skilled Nursing Center. He was 90. Born in Worcester, the son of Edward and Eva (Couture) Berthiaume, Donald spent most of his life in Worcester and graduated from Commerce High School. He went on to establish and successfully run his own business, Plaza Express Delivery, for over 45 years. He later worked at Priority Mail and Courier Service for many years before his retirement. He worked hard to take care of his family and played a vital role in the lives of both his children and grandchildren. Donald loved hunting, playing pool, enjoyed the family trips to the Caribbean and could be found happily playing craps at Foxwoods or Atlantic City. He will be remembered for being kind, loving and never getting angry over anything. Donald is survived by his loving wife of 60 years, who will miss him dearly, Judith A. (Wright) Berthiaume; a son, Michael E. Berthiaume and his fiancé, Tina Bradford of Douglas; a daughter, Lori A. L’Heureux of Worcester; and two grandchildren, Stephen Berthiaume of Shrewsbury and Michelle L’Heureux and her fiancé, Heng Dia of Shanghai, China. Donald was predeceased by his two brothers, Arthur Berthiaume and Gastone Berthiaume. Donald will be forever in the hearts of his family and friends. Relatives and friends are invited to a Funeral Mass at 11:00 am on Friday, December 4, at St. George Parish, 40 Brattle St., Worcester. A burial will follow at St. John’s Cemetery, 260 Cambridge St., Worcester. In lieu of flowers, memorial donations in his name can be made to Autism Resource Central, 712 Plantation St., Worcester, MA 01605. Funeral arrangements are under the care of Miles Funeral Home, Greater Worcester Funeral Care. To share a memory or to offer an online condolence, please visit the "Tribute Wall" on this page.

The family of Donald J. Berthiaume created this Life Tributes page to make it easy to share your memories.

Send flowers to the Berthiaume family.