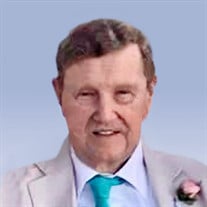 JEFFERSON – Donald W. Holmes, 81, beloved husband of Jeannette (Karolak) Holmes, passed away peacefully in the comfort of his home surrounded by his loved ones on Thursday, April 22, 2021. Born in Worcester and raised in Holden, he was a son of the late Oliver and Doris (Fletcher) Holmes. Donald graduated in 1958 from Wachusett Regional High School and was a member of the first incoming freshman class when it became a four-year school. After graduation, Donald proudly served his country in the United States Navy during the Cuban Crisis. Upon his return home, he began a long career as a production specialist with Norton Company and retired as an assistant foreman. Donald was a talented pianist and enjoyed playing and listening to music. In his spare time he was an antique car enthusiast, often visiting local car shows with Jeannette and their family. Donald had a great fondness for his beloved cats and pets. He will be lovingly missed and remembered by his wife of 56 years, Jeannette; a son, Kenneth W. Holmes of Amherst, NH; his two daughters, Sharon K. Hughes and her husband, Frank of W. Yarmouth, and Susan E. Holmes of Rumford, ME; and his two sisters, Nancy Downey of Mesa, AZ and Patricia Manahl and her husband, Bob of S. Yarmouth. Donald had three grandchildren, Isaac Camp and his wife Chu Yi Lin-Camp, Benjamin Camp, and Grace Keller, and two great-grandchildren, Anthony and Angelo Camp as well as many nieces, nephews, and cousins. In addition to his parents, he was predeceased by his brother, Robert G. Holmes. Relatives and friends are invited to gather with Donald’s family from 10 to 12 p.m. on Wednesday, April 28th at Miles Funeral Home, 1158 Main Street, Holden. A funeral service will follow at 12 noon in the funeral home. Donald will be laid to rest at Worcester County Memorial Park, 217 Richards Avenue, Paxton, following the service. In lieu of flowers, memorial donations may be made to St. John’s Food for the Poor Program, 44 Temple Street, Worcester, MA 01604 or www.stjohnsfoodforthepoor.org Please visit the "Tribute Wall" on this page to share a memory or offer an online condolence.

JEFFERSON &#8211; Donald W. Holmes, 81, beloved husband of Jeannette (Karolak) Holmes, passed away peacefully in the comfort of his home surrounded by his loved ones on Thursday, April 22, 2021. Born in Worcester and raised in Holden, he was... View Obituary & Service Information

The family of Donald W. Holmes created this Life Tributes page to make it easy to share your memories.

Send flowers to the Holmes family.