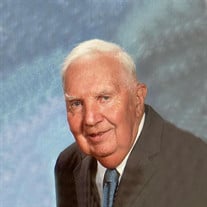 WORCESTER/RUTLAND - Donald F. Stoddard, 94, of Worcester, a retired insurance company manager, died January 27, 2021 after an illness with his two children by his side. He leaves a daughter, Jocelyn H. Brayshaw of New York City, a son, Owen N. Stoddard of Old Orchard Beach, ME; nine grandchildren and cousins in Nova Scotia. He is predeceased by his wife of 65 years, Judith L. (Powers) Stoddard, who passed away on January 8, 2021. He was born in Woods Harbour, Nova Scotia, son of the late Loran H. and Myrtle M. (Fuller) Stoddard and lived 46 years in Rutland before moving to Worcester in 2009. He graduated from South High School in Worcester in 1944, received a BBA from Clark University in Worcester in 1954 and an MBA from Boston University in 1955. He also received a M.Ed. from Worcester State University. He was an army veteran serving with the 24th infantry division which was part of the Eighth Army in Korea in 1951. Don used the G.I. Bill to fund his college endeavors. The 24th division participated in one of the largest battles of the Korean War on April 21, 1951. Don worked in the law department for 32 years at the State Mutual Life Assurance Company now Hanover Insurance Group in Worcester. He later worked as a substitute teacher at Wachusett Regional High School in Holden for 9 years. He was a member of First Baptist Church of Worcester, an American Baptist Church, for over 60 years where he served on various boards and committees. He became a Master Mason and member of Montacute Lodge in Worcester in 1950 and was recently affiliated with Rufus Putnam Lodge of Masons in Rutland. He was also a member of the American Legion Post 310 in Rutland, Veterans of Foreign Wars, Korean War Veterans Association, and the 24th Infantry Division Association. His interests were military history, tennis, folk music, and participating in the Central Mass Senior Softball League. Don and his family enjoyed vacationing in Ogunquit, ME every summer where they had many friends. He was a supporter of Old Sturbridge Village and the Worcester Art Museum. A memorial service honoring both Don and his wife, Judith will be held at the First Baptist Church, 111 Park Ave., Worcester, MA at a date yet to be determined. There are no calling hours. Following the service, they will be laid to rest in Rural Cemetery, Rutland. In lieu of flowers, memorial donations may be made to the University of Massachusetts Memorial Foundation, UMass Medicine Development Office, 333 South St. Shrewsbury, MA 01545. Make checks payable to UMMF. Funeral arrangements are under the care of Miles Funeral Home, Greater Worcester Funeral Care. To share a memory or offer a condolence please visit "The Tribute Wall."

WORCESTER/RUTLAND - Donald F. Stoddard, 94, of Worcester, a retired insurance company manager, died January 27, 2021 after an illness with his two children by his side. He leaves a daughter, Jocelyn H. Brayshaw of New York City, a son, Owen... View Obituary & Service Information

The family of Donald F. Stoddard created this Life Tributes page to make it easy to share your memories.

Send flowers to the Stoddard family.