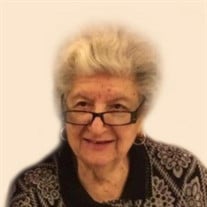 WORCESTER - Doris (Abdo) Salem, age 91, passed away peacefully with her 2 daughters at her side on Thursday, December 3, 2020 at UMass Medical Center in Worcester. Doris was the daughter of the late George and Rose (Abodeely) Abdo of Salem, MA. She will be lovingly missed and remembered by her 2 daughters, Linda Salem Pervier and her husband Michael of Worcester and Donna Karapatsas of Worcester, her brother Dr. Daniel Abdo, brother-in-law Thomas Haddad, 3 granddaughters, Stephanie Hall and her husband Matt, Eleni Karapatsas and Chelsea Withers, 2 grandsons James Karapatsas and his wife Deme, Jesse Salem, 4 great grandchildren, Alexandra and Julianna Hall and Strati and George Karapatsas and several nieces and nephews. She was predeceased by her husband James, her son James, her son-in-law Steven Karapatsas, her sister Florence Haddad, her brother George Abdo and several brothers-in-laws and sister-in-laws. Doris attended the University of New Hampshire, Clark University and Worcester State University. She was a member of St. George Orthodox Cathedral, and was a past member of its Women’s Club. While her children were young, Doris was a stay at home mom. Doris was an instructor in oil painting at Cross Academy in the 60’s and taught many students in her studio at home. In the 70’s Doris worked as a customer service representative and then bank manager at Bay State Savings Bank. In the mid-80’s to mid-90’s Doris worked in the respiratory care department at UMass Medical Center until her retirement. During her life, Doris enjoyed family gatherings and card games. She enjoyed playing bingo and trips to the casino with her family and friends. She was well-known for her Lebanese cooking and hosted many family gatherings. Doris’ family would like to thank the palliative team (Dr. Joel Bauman, Dr. Isabel Castro and Nancy McCool, LICSW) at UMass for their guidance and support during this difficult time. As a result of the Covid-19 pandemic, it was Doris’s wish to have her funeral and burial held privately and at the convenience of her family. In the event you wish to make a donation in Doris’s memory, contributions may be made to St. George Orthodox Cathedral Endowment Fund, 30 Anna Street, Worcester 01604. Funeral arrangements are under the direction of Philip G. Haddad, Jr. of Miles Funeral Home, 1158 Main Street, Holden. To share a memory or offer a condolence, please visit "The Tribute Wall." MAY HER MEMORY BE ETERNAL

WORCESTER - Doris (Abdo) Salem, age 91, passed away peacefully with her 2 daughters at her side on Thursday, December 3, 2020 at UMass Medical Center in Worcester. Doris was the daughter of the late George and Rose (Abodeely) Abdo of Salem,... View Obituary & Service Information

The family of Doris (Abdo) Salem created this Life Tributes page to make it easy to share your memories.

Send flowers to the Salem family.