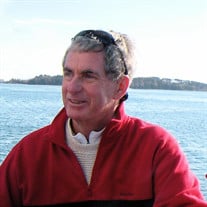 PAXTON - On March 18, 2021, Doug Crapser passed away peacefully at his home in Paxton. His three sons, sister, yellow lab, and his wife, the love of his life for over 48 years, were at his side throughout the five days leading up to his passing. Doug grew up in East Longmeadow, MA and was Class of 66’ at Northfield Mount Hermon School. At NMH, Doug was a standout athlete on the varsity football, ice hockey and baseball teams. He was a member of the Hall of Fame undefeated 1964 football team and played in the November 20th, 1965 game which became well-known after photographs captured the football game continuing uninterrupted despite a building engulfed in flames next to the field. Doug would go on to college and graduate school at Boston University, American International College, and Northeastern University where he played football and studied Business Administration. Doug’s career as an executive in health care administration in Massachusetts spanned forty five years. He worked at Harrington Hospital for thirty years, serving as Executive Vice President and Chief Operating Officer. During the past two years he served as Acting COO of Family Health Center of Worcester, where he continued working until just before his passing. He was passionate about sailing, traveling, and physical fitness; lifting weights, ice hockey, tennis, and trying to keep up with his grandchildren; Justin, Chloe, and Brett. He was an avid reader of non-fiction and a lifelong fan of Boston sports. And the only thing he enjoyed more than an evening full of laughs with friends & family over some microbrew beer was taking his wife out for “date night” every Friday. Above all, Doug devoted his life to his family. To his sons, he is the model for strength of character, resilience in the face of adversity, kindness and generosity towards others, and unconditional love and commitment to family. He spoiled his family with time and energy, always putting their well-being before his own. His dedication to working with his three sons to excel in academics and athletics was topped only by his commitment to embracing their independence and happiness. And he never ever missed one of his sons’ hockey games. Doug leaves behind his three sons Ryan, Ben, and Drew; their wives Alexandra, Marisa, and Gabrielle, respectively; his mother Cecelia; his sister Donna; his grandchildren Chloe, Brett and Justin; and his loving wife Suzanne. The family is holding a private service for immediate family and a celebration of his life gathering this summer at a date to be determined. In his role as COO of Harrington Hospital, he was instrumental in the development and launch of the Harrington Cancer Center. In lieu of flowers, people can make donations in his honor to the Harrington Cancer Center, https://www.harringtonhospital.org/support-harrington/donate/ or checks can be mailed to: Harrington Cancer Center, 55 Sayles Street, Southbridge, MA 01550; and/or to the Pancreatic Cancer Action Network (PANCAN), pancan.org/donate or checks can be mailed to: Pancreatic Cancer Action Network, 1500 Rosecrans Ave., Suite 200, Manhattan Beach, CA 90266. Arrangements are under the care of the Miles Funeral Home, 1158 Main Street, Holden. To share a memory or offer an online condolence, please visit "The Tribute Wall."

PAXTON - On March 18, 2021, Doug Crapser passed away peacefully at his home in Paxton. His three sons, sister, yellow lab, and his wife, the love of his life for over 48 years, were at his side throughout the five days leading up to his passing. Doug... View Obituary & Service Information

The family of Douglas M. Crapser created this Life Tributes page to make it easy to share your memories.

Send flowers to the Crapser family.