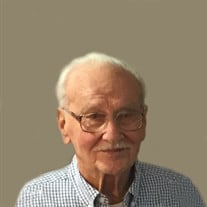 PAXTON - Edison B. Campbell, Jr. 92, died peacefully on Sunday, April 18, 2021 at UMass Memorial Medical Center - University Campus, Worcester. He was born in Worcester the son of the late Edison B. Campbell, Sr. and Grace (Moyer) Campbell. Edison attended Worcester Schools and was a proud World War II veteran serving in the U.S. Army during the occupation of Japan. Upon returning home, he resumed working at Harrington and Richardson Arms Co. as a Master Toolmaker. While working there, Edison met the love of his life, Elizabeth. The couple married and settled in Paxton where they lived for the last 61 years. He later worked many years for Boston Digital in Hopkinton before retiring in 2001. Edison was a member of the First Congregational Church of Paxton. He was also a member of the Rufus Putnam Lodge of A.F. & A.M., the Aleppo Shriners, and the Scottish Rite. He enjoyed spending time with friends from the Men’s Club and Veterans’ Club at the Paxton Senior Center as well as taking part in activities at The Hills at Paxton Village. For many years Edison and Elizabeth enjoyed spending their summers at Wakeda Campground, relaxing by the Merrimack River at Salisbury Beach or spending afternoons on New Castle Island watching for the MV Thomas Layton to cruise through Portsmouth Harbor. They also enjoyed trips to Mohegan Sun and watching sports together, especially golf. Edison will be sadly missed and lovingly remembered by his wife of 68 years, Elizabeth J. (MacKirdy) Campbell; his daughter, Linda Higgins and her husband, John of Ware; his brother, Robert Campbell and his wife, Jennie of Milford; his grandson, Matthew E. Higgins of Waltham and his loving nephews, nieces and cousins. He was predeceased by his grandson, Michael J. Higgins. Relatives and friends are invited to attend a calling hour from 11 a.m. to 12 noon followed by a funeral service at 12 noon on Friday, April 23, 2021 at Miles Funeral Home, 1158 Main St., Holden. Burial will follow at Worcester County Memorial Park, 217 Richard's Ave., Paxton. In lieu of flowers, donations may be made to Paxton Council on Aging (Paxton Senior Center) 17 West Street Paxton, MA 01612. To share a memory or offer a condolence please visit "The Tribute Wall."

The family of Edison B. Campbell, Jr. created this Life Tributes page to make it easy to share your memories.

Send flowers to the Campbell family.