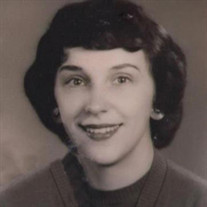 WORCESTER - Edna P. (Dorbet) Bolivar, 86, of Worcester, passed away peacefully of natural causes surrounded by her loving family on February 14, 2021. Edna was born on December 24, 1934, in Webster, Massachusetts, daughter of the late Stanley and Pauline Dorbet. Edna attended Commerce High School in Worcester, Quinsigamond Community College, receiving an ASN degree, and Assumption College, receiving a Bachelor of Science Degree in Nursing in 1981. Edna’s career in nursing at UMass Memorial Hospital in Worcester began in 1974 until her retirement in 1999, serving as the Hemophilia Nurse Coordinator for the New England Hemophilia Center (Memorial) for 13 years. Edna enjoyed nothing more than being home with her family, doting on her many grandchildren and especially enjoying time with the love of her life Robert, her late husband who passed away on June 19, 2020, after 64 years of marriage. Edna also enjoyed collecting antiques, yard sales, shopping and traveling. Edna is survived by her four sons, Robert and his wife, Barbie Bolivar of Holden, Steven and his wife, Christine Bolivar of Shrewsbury, David and his wife, Kendra Bolivar of Worcester and Daniel and his wife, Sharon Bolivar of Leicester; nine grandchildren; four great-grandchildren; a nephew, Tom Bolivar and her niece, Paula Moran of Wakefield. Edna’s sister Florence predeceased her. The family will hold a private ceremony to celebrate Edna's life. To share a memory or to offer an online condolence, please visit the "Tribute Wall" on this page.

The family of Edna P. (Dorbet) Bolivar created this Life Tributes page to make it easy to share your memories.

Send flowers to the Bolivar family.