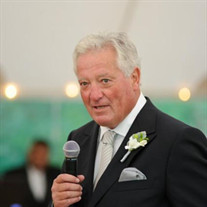 WEST BOYLSTON/STERLING – Edward P. LaVigne passed away peacefully after a long illness under the loving care of his family on September 4, 2021 at the age of 69. Born in Worcester and raised in West Boylston, Eddie was the son of the late Edward N. and Margaret A. (Mombourquette) LaVigne of Nova Scotia. Eddie was known to his friends for his prolific storytelling, unparalleled sense of humor, impeccable fashion, strong faith, loyalty and athleticism. He was the straw that stirs the drink, with a magnetic personality that brought people together. After graduating from West Boylston High School, he went on to get his undergraduate and graduate degrees from Assumption College, where he became the winningest pitcher in Assumption’s history. Eddie was an All-Star for the Yarmouth Red Sox in the Cape Cod Baseball League in ’71 and ‘72, and the starting pitcher in the ‘72 Cape Cod All-League All-Star Game. In 1979, Eddie was the youngest player ever inducted into the Assumption College Hall of Fame. In 2019, he was inducted in the W. Boylston Athletic Hall of Fame in basketball and baseball, where he recorded the highest number of career wins by a WBHS pitcher. Eddie went on to dedicate his life to education, athletics and family. After beginning his career in Admissions at Assumption College, Eddie founded Autopista Americas, a strategic academic/athletic recruiting firm that has helped thousands of students attend college. Eddie served many years as the chairman of the West Boylston School Committee. He will be profoundly missed by those who loved him including his wife Stephanie Decker, his two daughters with former wife Maureen (Doyle) LaVigne, Brieana Tascione and husband Nick of Newtown Square, PA, Alexandra LaVigne of San Francisco, CA, grandchildren, Ashley, Chloe, Jack, and Alise, his sister Judi Olkkola of Cape Cod, two step-sons, Yann and Erwann Bernard of Montreal, step-grandchildren and two nieces. He is predeceased by his oldest daughter, Andrea LaVigne, his granddaughter Aliana, second wife Janet Davidson, and by his parents. Relatives and friends are invited to gather and visit with Eddie’s family from 3-7 pm on Thursday, September 9, at Miles-Sterling Funeral and Tribute Center, 100 Worcester Rd., Sterling. A Mass of Christian Burial will be celebrated at 10 am on Friday, September 10th at St. Richard of Chichester Church, 4 Bridge St., Sterling. Eddie will be laid to rest next to his daughter, granddaughter and parents at Mt. Vernon Cemetery in West Boylston. In lieu of flowers, donations may be made to: Yarmouth-Dennis Red Sox Baseball Club, Inc. P.O. Box 1423, South Yarmouth, MA 02664 in memory of Edward LaVigne ’71—72.

WEST BOYLSTON/STERLING &#8211; Edward P. LaVigne passed away peacefully after a long illness under the loving care of his family on September 4, 2021 at the age of 69. Born in Worcester and raised in West Boylston, Eddie was the son of the... View Obituary & Service Information

The family of Edward P. LaVigne created this Life Tributes page to make it easy to share your memories.

Send flowers to the LaVigne family.