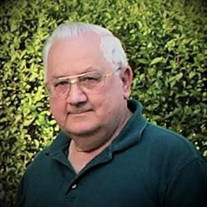 PRINCETON – Edwin P. Twarog, 85, a longtime resident, passed away in Worcester on Friday, November 20, 2020 after a long battle with dementia/Alzheimer’s. He was preceded in death by his wife of 53 years, Lillian Ann (Stamp) Twarog; his parents, Stanley and Marya Twarog; his three brothers, Leon, Frederick and Walter Twarog; and his sister, Sophie Souza. Ed is survived by his son, Evan Twarog of Princeton; his daughter, Cathy Twarog of Brandon, FL; his grandchildren, Jared Frigo and his wife, Paula of Port St. Lucie, FL, Christopher Frigo of Brandon, FL, Kyle Twarog and Monica A. Twarog, both of Wolcott, CT; his great grandson, Thomas Frigo of Port St. Lucie, FL; his sisters, Helen Canton and Jennie Mis both of New Bedford; and many nieces and nephews. Ed graduated with a BS in Electrical Engineering from the New Bedford Institute of Technology in 1961. He was a member of ASEE (American Society for Engineering Education) up until his retirement in 1995 where he was a Sr. Principal Engineer at Raytheon Company in Marlboro. He served his country as a Staff Sergeant in the United States Air Force from 1953 to 1957 and was a lifetime member of the American Legion and the Veterans of Foreign Wars, where you could often find him serving holiday meals to our military veterans. Prior to this horrible disease taking control of his mind, Ed was an avid reader, enjoyed lounging by the pool and spending time with his family and friends. We are comforted in knowing that Ed now knows who he is and is no longer suffering. The family would like to thank his caregivers and hospice nurses at Tatnuck Park Assisted Living Facility (Memory Care Unit) in Worcester who were greatly appreciated. In lieu of funeral services and to honor Ed, we ask that all who wish to participate make a donation to the Alzheimer’s Foundation of America at https://alzfdn.org/support-us/donate. Arrangements are under the care of the Miles Funeral Home, 1158 Main Street, Holden. To share a memory or offer an online condolence, please visit the "Tribute Wall" on this page.

PRINCETON &#8211; Edwin P. Twarog, 85, a longtime resident, passed away in Worcester on Friday, November 20, 2020 after a long battle with dementia/Alzheimer&#8217;s. He was preceded in death by his wife of 53 years, Lillian Ann (Stamp) Twarog;... View Obituary & Service Information

The family of Edwin P. Twarog created this Life Tributes page to make it easy to share your memories.

Send flowers to the Twarog family.