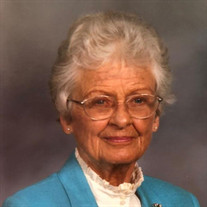 HOLDEN / DURHAM, NH - Elizabeth “Lib” (Chapple) Decker, 101, died peacefully in her sleep on Monday, March 1, 2021 at Harmony Homes By The Bay. She was the beloved wife of the late Percy "Tweet" C. Decker. Lib was born on November 11, 1919 in Worcester, the daughter of Robert and Mabel (Ingham) Chapple. She will be lovingly missed by her four children including her son, Joe Decker of Vancouver, British Columbia; three daughters, Judy Crosier of Dover, NH, Joan Zaramba, and her husband, Philip of Worcester, and Jean Johnson of Old Orchard Beach, ME; her brother, Rev. John H. Chapple of Littleton, CO; her nine grandchildren and ten great-grandchildren, whom she was affectionately known as "Mimi"; and her many nieces and nephews. In addition to her parents and her husband of 34 years, Tweet, she was predeceased her brother, J. Robert Chapple. She was a graduate of Classical High School in Worcester, Class of 1937. Lib and Tweet met and married in the Tatnuck Square section of Worcester. They moved to Holden in 1939 and soon after purchased their home at 47 Woodland Road, where Lib resided for 77 years. Following the death of her husband, she worked at the Gale Free Library in Holden retiring in 1989. She enjoyed being a Library Lady and especially liked driving the bookmobile. Lib was a loyal member of The First Congregational Church of Holden where she loved singing in the choir and volunteered in many capacities. She loved her home on Woodland Road, where family and friends from near and far were warmly welcomed. Lib was happiest outdoors tending her beautiful gardens. She loved to swim and sun at Comet Pond in Hubbardston and at the seashore. She was the only surviving member of the Holden Sewing Club and Bridge Club. She also enjoyed crossword puzzles, counted cross stitch, knitting, calligraphy and was an avid reader. Lib treasured her independence and her characteristic perseverance allowed her to remain in her beloved home until age 97. She lived her final four years in assisted living at Harmony Homes. The family deeply thanks their wonderful staff for their exceptional care, especially during this past year of isolation. Her funeral services will be private under the direction of Miles Funeral Home, 1158 Main Street, Holden. In lieu of flowers, contributions may be made to The First Congregational Church of Holden, 1180 Main St. Holden, MA 01520. To share a memory or to offer an online condolence please visit the "Tribute Wall" on this page.

The family of Elizabeth "Lib" (Chapple) Decker created this Life Tributes page to make it easy to share your memories.

Send flowers to the Decker family.