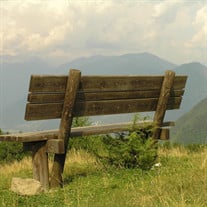 PRINCETON - Elwood "Butch" Hogarth Jr., 72, beloved husband of the late Gayle (Atkins) Hogarth, passed away on Monday, October 25, 2021, at Leominster Hospital after a brief illness. Born in Abington, PA, Butch was the first-born son of the late Elwood and Dorothy (Beck) Hogarth. He attended Bristol High School and married the love of his life, Gayle. Butch proudly served his country in the United States Army in Okinawa in 1969 and then proceeded to work for Donnegan Systems, Inc. until his retirement. Butch enjoyed singing, playing guitar, flying, and building model RC planes. He was a member of the Quinapoxet Model Flying Club and traveled throughout New England to participate in shows. He had many friends involved in the same hobbies, all of who cared for him deeply. He is survived by his son, Jason; his brothers, Ralph, Jack, Jim, and Dennis all of Pennsylvania, and Michael of South Carolina; and his sisters, Elaine Renkin of Pennsylvania and Linda Wood of Nebraska. In addition to his parents and his wife, Gayle, he was predeceased by his daughter, Jenna Hogarth. Family and friends are invited to join the family on Friday, November 12, from 5 pm - 7 pm at the Miles Funeral Home, 1158 Main Street, Holden. Funeral Services will be held at 11 a.m. on Saturday, November 13, in the First Baptist Church of Holden, 1216 Main Street. Burial will follow at Grove Cemetery, 1520 Main Street, Holden where Butch will be laid to rest beside his wife, Gayle. To share a memory or offer a condolence, please visit the "Tribute Wall" on this page.

PRINCETON - Elwood "Butch" Hogarth Jr., 72, beloved husband of the late Gayle (Atkins) Hogarth, passed away on Monday, October 25, 2021, at Leominster Hospital after a brief illness. Born in Abington, PA, Butch was the first-born son of the... View Obituary & Service Information

The family of Elwood "Butch" Hogarth Jr. created this Life Tributes page to make it easy to share your memories.

Send flowers to the Hogarth family.