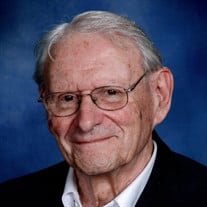 Please follow this link to view the service for Emanuel "Manny" Magid: https://client.tribucast.com/tcid/26143043 WORCESTER - Emanuel (Manny) Magid, 95, of Worcester, Massachusetts, formerly of Maplewood, New Jersey, passed away on December 23, 2020 at his home. He was the beloved husband of the late Phyllis (Sperber) Magid. Manny was born in New York, NY to Max and Anna Magid on March 14, 1925. He graduated Brooklyn College in 1942, and began his teaching career prior to serving in the U.S. Army Counter Intelligence Corps. In 1948, he earned a master’s degree from Columbia Teachers College and subsequently taught at several schools in Newark, NJ, including South Side then East Side High School, where he was chairman of the Math Department until 1977. He was active in the Newark Teachers Union and kept in touch with colleagues after his retirement. He had a positive impact on thousands of students, some of whom he remained in contact with during his retirement years. After his teaching career, he joined the American Jewish Joint Distribution Committee, where he worked from 1977 through 1983. From 1983 until his retirement in 1993, he worked as an accountant. He was a member of Congregation B’nai Israel of Millburn, NJ for over 50 years, before moving to Massachusetts and joining Congregation Beth Israel in Worcester, MA. Manny was an ardent fan and supporter of the Metropolitan Opera and when he moved to Massachusetts, he transferred his musical alliance to the Worcester Chamber Music Society. He remained intellectually engaged throughout his long life and followed current events (especially politics) closely. Manny is survived by his sons, Martin Magid (Elizabeth) of Newton, David Magid (Debra) of Worcester, MA, and Joseph Magid (Elizabeth) of Wynnewood, PA, and his grandchildren, Joshua, Rachel, Zoe, Noah, Max, and Zachary. He is preceded in death by his wife Phyllis. A Private Graveside Funeral Service was held on Long Island on December 24th under the direction of Miles Funeral Home of Holden, MA. Memorial donations may be made to: The Blue Card Fund, 171 Madison Avenue, Suite #1405, New York, NY 10016 (https://www.bluecardfund.org/), Hebrew Free Loan Society, 675 Third Avenue, 19th Floor, New York, NY 10017 (https://hfls.org/donate/), or Worcester Chamber Music Society, 323 Main Street, Mechanics Hall, Worcester, MA 01608 (https://worcesterchambermusic.org/). The family extends their deepest gratitude to the caring staff of Independence Health Care, Jewish Healthcare Center LifeCare and Hospice Services, and Highland House for enabling Manny to live his later years independently and with dignity.

The family of Emanuel Magid created this Life Tributes page to make it easy to share your memories.

Please follow this link to view the service for Emanuel &quot;Manny&quot;...

Send flowers to the Magid family.