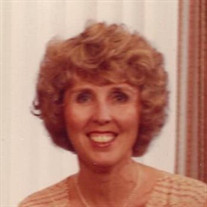 PETERSHAM - Emily Arnold of Petersham, Massachusetts died on the morning of February 14, 2021 at the age of 85. She was born in Palo Alto, California on January 13, 1936 to Tom and Fanny Arnold. She is remembered as a social butterfly, generous and kind to all. Emily was a beloved member of the Petersham community, serving on boards at the Petersham Art Center and Petersham Memorial Library, as well as on the Parish Committee at the First Congregation Parish, Unitarian of Petersham. Many will remember her decked out in flag attire on the Fourth of July, behind the wheel of her 1965 Mustang convertible. Her mastery as a knitter and seamstress, and designer of wearable art of all kinds, led to opening her own shop on Main Street in Athol, Massachusetts, called Emily’s Needleworks. Before moving to Petersham, she was a teacher’s aide in Palo Alto and was likewise beloved by the children and her colleagues there. She was a supporter of the theater, arts and music, and a world traveler. Her creative spirit, the bright light in her eyes, and the beautiful smile that could warm any room will be greatly missed. Emily is preceded in death by her brother Mike Arnold and her half-siblings Tom Arnold, Bernice Grimm, Dorothy Arnold, and Mary Mack. She is survived by her siblings Henry Arnold, Jesse Arnold, and Sally Rench; her daughters Deborah Haynes, Kathryn Ball (Dino Gay), and Rini Kilcoyne; her grandchildren Alfonso Gonzalez, Ricci Gay (Cassidy Spaeth), Reggie Gay, Torrance Kilcoyne, Hannah (Ryan) Aghdam, and Amelia Kilcoyne; her great-grandchildren Conner Gonzalez and Andrew Barrett Aghdam; and numerous nieces and nephews. Arrangements are under the care of Miles Funeral Home, 1158 Main Street, Holden. To share a memory or offer a condolence please visit "The Tribute Wall."

PETERSHAM - Emily Arnold of Petersham, Massachusetts died on the morning of February 14, 2021 at the age of 85. She was born in Palo Alto, California on January 13, 1936 to Tom and Fanny Arnold. She is remembered as a social butterfly, generous... View Obituary & Service Information

The family of Emily Arnold created this Life Tributes page to make it easy to share your memories.

Send flowers to the Arnold family.