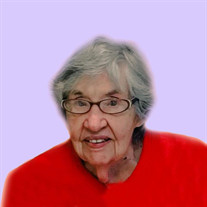 WEST BOYLSTON - Emily Fred, 97, formerly of West Boylston, died peacefully at home in Falmouth surrounded by her loving family on Wednesday, September 30, 2020. She was born in Holden, MA, daughter of the late John W. and Dagmar E. Carlson. Two brothers, John H. Carlson and Warren W. Carlson predeceased her. Her husband of 73 years, Walter Fred, died in 2019. She is survived by her two daughters, Cindy Monroe and her husband Paul, of Pocasset and Marcia Chaffin and her fiancé Scott Eddy of Falmouth; her four grandchildren, Erica Yates and her husband Stephen of Scituate, Matthew Monroe and his wife, Ally of Scituate, Colleen Chaffin of Grafton, and Katie Chaffin of Austin, TX; 5 great grandchildren, Hailey, Jenna, Amelia, William and Morgan; several nieces, nephews and cousins. Emily, affectionately known to many as Nana or Gigi, was a longtime resident of West Boylston. She graduated in 1941 from Holden High School and was on the 50 year reunion committee. She attended the Salter School in Worcester and worked as a secretary at both Norton Company and Olson Manufacturing Company in Worcester. Emily was a member of Trinity Lutheran Church and served on the Altar Guild. She was a member of the Order of Runeberg. She and Walter enjoyed spending weekends with their lifelong friends, affectionately known as “The Gang.” She also enjoyed her monthly outings with her family in the “Sister-in-Law Club.” Emily looked forward to spending time with her family, especially her grandchildren and great-grandchildren. She was an avid reader and an excellent cook. She enjoyed sewing, dancing and traveling. Emily and Walter loved taking bus trips with their friends. A memorial service will be held in her honor at Trinity Lutheran Church, 73 Lancaster St., Worcester at 11a.m. on Friday, October 9th. A burial will follow at Worcester County Memorial Park, 217 Richards Ave., Paxton. In lieu of flowers, donations may be made to Trinity Lutheran Church, 73 Lancaster St., Worcester, MA 01609. Funeral arrangements are under the care of the Miles Funeral Home, 1158 Main St., Holden. To share a memory or to offer a condolence, please visit the "Tribute Wall" on this page.

The family of Emily Fred created this Life Tributes page to make it easy to share your memories.

Send flowers to the Fred family.