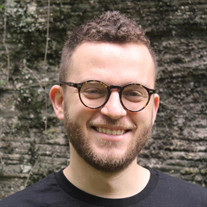 WORCESTER / BROOKLYN - Eric Adam Salitsky, 35, an architectural designer at ESKW/Architects in Manhattan, where he specialized in transitional and supportive housing and education, was killed on Thursday, May 5th, while cycling near his home in Brooklyn, New York. Eric was born in Worcester, MA and was in one of the first graduating classes from the Gann Academy in Waltham, MA. After high school he spent a formative year studying and volunteering in Israel, where he met his future wife. Eric went on to graduate from the University of Wisconsin, Madison in 2010, with a Bachelor’s in Philosophy and Religious Studies and served as an interfaith fellow at the Lubar Institute for the Study of Abrahamic Religions. After graduation, Eric returned to Israel to pursue a career in interfaith dialogue, this experience opened his eyes to the unique spatial opportunities to create and facilitate effective dialogue and encounter. Eric returned to the United States to pursue a Master’s Degree in Architecture at the Pratt Institute, graduating in 2017. In addition to his work at ESKW/A, he studied and consulted on the design of multi-faith worship spaces. Upon receiving the 2019 LeBrun Travel Grant from the Center for Architecture (AIANY), Eric began a process of discovery to study the architectural implications of multifaith worship spaces and to advocate for clearer understandings of their complex programs. Through the grant, he traveled across Europe and North America to document the design and history of multi-faith worship spaces, in places like airports, hospitals, universities and other public institutions. The result was a curated exhibition titled, “The Global Phenomenon of Multi-faith Worship Spaces,” which appeared at the AIANY’s Center for Architecture. Eric believed that multi-faith spaces can potentially serve as living rebuttals to tribalism and divisiveness, showing how people of diverse backgrounds and beliefs can successfully worship in the same space without conflict. He believed that by sharing a space of prayer or meditation with other groups, you recognize each other’s humanity. He went on to lead a workshop for university chaplains, consulted on the complex typology to design firms, participated in design competitions, and continued to research and write on the subject. He hoped to continue to gain expertise in this subject in order to create more opportunities for dialogue and encounter without sacrificing programmatic robustness and spiritual aesthetics. Eric will be remembered as a deeply compassionate, engaging and thoughtful person, who was gifted in making others feel comfortable and accepted in his presence. He had a quiet disposition, which made him a great listener, combined with unparalleled gregariousness, warmth and passion. He embraced all that life had to offer, and was a deeply inquisitive individual who loved all forms of travel, learning, art, creativity, and fun. He will be fervently missed. He leaves behind his beloved wife, Tamara Cohen, his mother, Barbara, sister, Amy, his brother, Ira and his wife, Dinara, nephews, Andrew and Aaron, his father-in-law, Isadore Cohen, sister-in-law, Melissa Cohen and her husband, Ryan Jacobs, their newborn son Harrison and Eric and Tamara's beloved dog, Pecueca. He was preceded by his father, Andrew Salitsky and his mother-in-law, Rosita Ovadia Cohen. Eric was eagerly anticipating the arrival of his first child. Eric’s funeral was in Brooklyn, New York on Friday, May 6th, followed by burial in Worcester, Massachusetts at B’nai Brith Lodge Cemetery later that afternoon under the care of Miles Funeral Home of Holden. There will be a gathering in memory of Eric on Sunday, June 5th from 5 PM - 8 PM at 125 Delancey St. Manhattan, New York. Memorial contributions can be made in Eric’s memory to Designing Justice/Designing Spaces, 2744 East 11th Street, Suite H03, Oakland, CA 94601, https://designingjustice.org/in-memoriam-eric-salitsky. In Eric’s own words, “I’m a big fan of Designing Justice/Designing Spaces, they use architecture, planning and development to fight mass incarceration through community programs, advocacy and policy." Donations can also be made to the Jewish Healthcare Center and Congregation Beth Israel.

WORCESTER / BROOKLYN - Eric Adam Salitsky, 35, an architectural designer at ESKW/Architects in Manhattan, where he specialized in transitional and supportive housing and education, was killed on Thursday, May 5th, while cycling near his home... View Obituary & Service Information