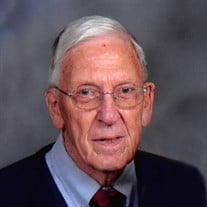 HOLDEN – Eric Theodore (Ted) Strom, 95, passed away peacefully on Tuesday, August 24, 2021, at Sterling Village Nursing Home. Born and raised in Worcester, he was the son of Axel and Elsa Strom and the loving husband of his late wife, Beverly who passed away last December. After graduating from Commerce High School, he served in the Army Air Corps in Arizona. When he returned home, he worked at the MPA later known as Paul Revere Life Insurance Company where he met and married his wife of 72 years, Beverly. He then continued his education at Worcester Junior College where he got his degree in Mechanical Engineering. He worked at Wyman-Gordon Company in their Research and Development Department until he retired in 1985 to spend time with his grandchildren who lovingly referred to him as Buppa. He and Beverly raised their four children in Holden where he was a member of the First Congregational Church. He was also a former longtime member of Wesley United Methodist Church of Worcester. He enjoyed vacations at Lake Winnipesaukee, family camping trips both cross-country and around New England, many trips to California, and also traveling to Europe and particularly Sweden to visit his relatives. In his later years, he and Beverly enjoyed many trips with the Greendale Retired Men’s Club. In his spare time, he could often be found in his basement workshop where he crafted many woodworking projects. He also enjoyed walking or biking the rail trails with his neighbor, Hank Ouellette. He loved family gatherings, with his children and grandchildren. He will be lovingly missed and remembered by his son, Kenneth Strom and his wife, Betty of Jefferson; his three daughters, Karen Guinee and her husband, Stephen of Rochdale, Elaine Trutor and her husband, Bill of Holden and Dianne Glenwright and her husband, Tristan of Half Moon Bay, CA; seven grandchildren; and one great-grandchild. He also leaves his sister, Elsa Ahnrud of Briarwood in Worcester; and several nieces and nephews. In addition to his wife and parents, he was predeceased by his brother, Oke Nystrom of Holden. The family would like to thank Sterling Village as well as Tatnuck Park of Worcester for the wonderful care they provided the past two years. A memorial service will be held for both Ted and Beverly at the First Congregational Church of Holden on September 25th at 10:00 a.m. followed by a private graveside service. In lieu of flowers, donations may be made to Wachusett Greenways, P.O. Box 121, Holden, MA 01520 or the First Congregational Church of Holden, 1180 Main St. Holden, MA 01520. Funeral arrangements are under the care of Miles Funeral Home, 1158 Main Street, Holden. To share a memory or offer condolence, please visit the "Tribute Wall" on this page.

HOLDEN &#8211; Eric Theodore (Ted) Strom, 95, passed away peacefully on Tuesday, August 24, 2021, at Sterling Village Nursing Home. Born and raised in Worcester, he was the son of Axel and Elsa Strom and the loving husband of his late wife,... View Obituary & Service Information

The family of Eric Theodore (Ted) Strom created this Life Tributes page to make it easy to share your memories.

Send flowers to the Strom family.