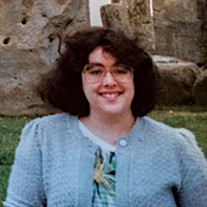 Frances' graveside service will be livestreamed at 11:00 am, Thursday, October 7th, at this link: https://client.tribucast.com/tcid/44162375 LEOMINSTER - Frances Deborah Katz, 60, a Leominster native died suddenly and unexpectedly in Decatur, GA on Sept. 14, 2021. She leaves her aunt Ethel Katz Abramoff of Worcester, and seventeen first cousins, Ruth Katz Berman of Worcester, Harriet Joseph Robbins of Worcester, David Chaifetz of FL, Robert Joseph of Sudbury, Jerome Katy of FL, Richard Chaifetz of MD, Ruth Gail Joseph Cohen of Eastham, Martha Katz-Hyman of VA, Daniel Joseph of Leominster, Barbara Abramoff Levey of NC, Judith Katz of RI, Lawrence Abramoff of Worcester, David Abramoff of CO, Debra Abramoff Brooks of Marblehead, and Robert, Richard and Raymond Perlman. She was born in Leominster, the only child of the late Harry and Matilda (Jaffe) Katz and had lived in Boston and in New York City before moving to Decatur, GA in 1998. She graduated from Boston University with a degree in journalism and earned a masters’ degree in English and American literature at Harvard University. After graduate school, Frances was a staff writer at the Boston Herald, working in the features department, about television and culture. Moving to New York City, she worked for the New York Times’ earliest digital efforts, Cowles Media Daily, and MTV. Moving to Atlanta in 1998, working as a technology reporter for the Atlanta Journal-Constitution. Reinventing herself in her 40’s, Frances graduated from New England Law School of Boston, where she helped write the first edition of the Digital Media Law Guide as a clerk at Harvard’s Berkman Klein Center for Internet and Society. She became a project attorney at the law firm of Alston & Bird, a job she described as “using my legal education to help some of the good guys win.” In Atlanta she also returned to journalism, building out a successful freelance career focused on books, television, food, culture, and travel. Her work appeared in a wide range of publications, The Washington Post, The New York Post, The Week, USA Today, Marie Claire, Redbook, and Roads & Kingdoms, Chowhound, and Lonely Planet News. Frances was deeply political and fiercely liberal. She had faith that people could and should come together to improve the lives of everyone. She was immensely proud of being Jewish, and was immersed in its traditions. Frances was a longtime member of Congregation Agudat Achim of Leominster. Frances loved to travel. She was a passionate fan of the Boston Red Sox, Baby Yoda, and Ted Lasso. Graveside funeral services will be held at 11:00AM on Thursday, October 7th in B’Nai Brith Cemetery at 55 Saint John’s Road, Worcester under the direction of Richard Perlman of Miles Funeral Home of Holden. Memorial Contributions may be made to Congregation Agudat Achim, 268 Washington Street, Leominster, MA 01453 or to Rachel’s Table, 633 Salisbury Street, Worcester, MA 01609. To share a memory or offer a condolence please visit "The Tribute Wall."

The family of Frances Deborah Katz created this Life Tributes page to make it easy to share your memories.

Send flowers to the Katz family.