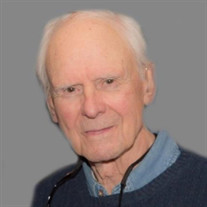 HOLDEN – Gary W. MacConnell, 85, beloved husband of the late Diane (Hicks) MacConnell, passed away peacefully in the comfort of his home surrounded by his loving family on Wednesday, November 11, 2020. Gary, the son of Theodore and Kathleen (Smith) MacConnell, was born in Lake Placid and raised in Granville, New York. Gary was a devoted family man whose world revolved around his wife of 59 years, his three children, six grandchildren and eight great-grandchildren. He was an accomplished professional who was educated at Clark University and began his career in 1956 in the actuarial department at Paul Revere Life Insurance Company of Worcester. He rose to the position of Vice President and C.I.O. before retiring in 1996 after 40 years of service. A devout Christian, Gary was a dedicated member of the First Presbyterian Church of Worcester. Gary lived his life in compassionate service to others. He applied his leadership skills in numerous organizations, where he focused his efforts on those who were most in need within his community and beyond. Gary also supported science based organizations and environmental causes. Gary will be lovingly missed and remembered by his son Daniel and his wife Gina; his son, Matthew and his wife Diane; his daughter Holly Day and her husband Gregory; his brother, David and his wife, Pam; his five grandchildren Eryl, Ross (Catherine), Karly (Tim) Snow, Anne (Andrew) Borges and Evan (Kate Kelly) Shaughnessy; and his eight great-grandchildren, Eleanor and Harold, Fiona and Juniper Snow, Holly Grace, Dallas and Madison Borges and Charlie Shaughnessy. In addition to his wife, Diane, he was predeceased by his sister Linda Adkins and his grandson Dylan. For health and safety concerns calling hours will not be held. A funeral service honoring his life will be held privately on Thursday November 19, 2020. This service will be streamed live at 1:30 p.m. on Thursday, via Facebook: http://www.facebook.com/fpcworcester/live. In lieu of flowers, memorial donations may be made to The First Presbyterian Church, 125 Holden Street, Worcester, MA 01606 or to the Rotary Club Education Fund of Worcester, PO Box 3413, Worcester, MA 01613-3413. To share a memory or offer a condolence please visit "The Tribute Wall."

HOLDEN &#8211; Gary W. MacConnell, 85, beloved husband of the late Diane (Hicks) MacConnell, passed away peacefully in the comfort of his home surrounded by his loving family on Wednesday, November 11, 2020. Gary, the son of Theodore and Kathleen... View Obituary & Service Information

The family of Gary W. MacConnell created this Life Tributes page to make it easy to share your memories.

Send flowers to the MacConnell family.