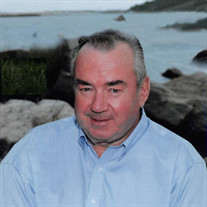 WORCESTER, MA / MANCHESTER, NH – George “Bud” F. Dunlee, 87, passed away peacefully on Monday, January 18, 2021, at the Rose Monahan Hospice Home in Worcester. He leaves his beloved wife of 53 years, Mary Louise (Donohoe) Dunlee; four loving daughters, Kathleen P. Dunlee and her husband, Todd Brooks of Worcester, Eileen M. Carlton and her husband, Trevor of Hollis, NH, Carol A. Nicholas and her husband, Jeffrey of Manchester, NH and Linda M. Haskell and her husband, Richard of Andover, MA. He was a proud grandfather to nine grandchildren, Andrew, Meghan and Patrick Brooks, Jenna and Kayla Carlton, Aaron Nicholas, Audrey and Kyle Haskell. He was predeceased by his grandchild, Ryan Nicholas, and his only sibling, Catherine (Dunlee) Rodden. The son of George E. and Helen T. (Donovan) Dunlee, Bud was born in Everett, MA and raised in Revere, MA. He graduated from Boston Trade School and immediately joined the United States Air Force, where he proudly and honorably served his country with the 585th Support Squadron during the Korean Conflict. After completing his years of service in the military, he joined his father in the printing industry at Boston Offset in Boston. When the company expanded its operations and established Concord Litho Group, Inc, in Concord, NH, Bud and his father were among the first employees at the new location. Bud remained at Concord Litho as a press foreman for over 30 years. When he was not at work or attending his children's many activities, he could be found engaged in a construction or renovation project utilizing his woodworking skills or on the golf course. Selfless, compassionate, and caring, Bud was always helping people. He would spend his vacations building decks for family and friends, surprising neighbors by snow blowing their driveways, and going out of his way to help anyone in need. In his retirement years, Bud and Mary Lou traveled around the United States where they attended reunions with his lifelong friends from the Air Force's First Pilotless Bomber Squadron. They enjoyed spending several winters in Florida and summers on Cape Cod. Above all, he appreciated any opportunity to create cherished memories with his family and dear friends. Out of love and concern for the safety of Bud’s family and friends, a private funeral Mass will be live-streamed from St. Mary’s Church in Jefferson at 10 a.m. on Saturday, January 23, and available for viewing at this link: https://client.tribucast.com/tcid/77471422. In lieu of flowers, memorial donations in his name may be made to the Alzheimer’s Association, Disabled American Veterans, or a charity of choice. Funeral arrangements are under the care of Miles Funeral Home, Greater Worcester Funeral Care.

The family of George "Bud" F. Dunlee created this Life Tributes page to make it easy to share your memories.

Send flowers to the Dunlee family.