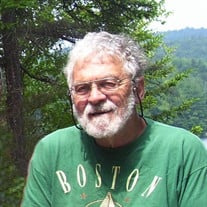 WORCESTER – George Blanding Dyer, Jr., 90, passed away peacefully on Friday, January 28, 2022, in the Health Center at the Willows at Worcester after a brief illness. He was born in Greenfield, the son of George Blanding Dyer, Sr., and Maude Evelyn (Rouillard) Dyer and lived in Westmoreland, NH before moving to the Worcester area. He leaves his loving wife of 32 years, Nola J. (Mindeman) Gerrits; his children, Debbie Frink of Gardiner, ME, Donna Collins of Webster, David Dyer of Greenfield, D.J. Andrus of Acworth GA, and Diane Dyer-Racicot of Oxford; his grandchildren, Derik Dyer, Jamie Dyer, Corey Dyer, Casey Dyer, Robbie Frink, Paul Frink, Sarah Frink, Katie Frink, Ryan Collins, Sam Andrus, Beth Andrus, Jenn Andrus, Joe Racicot, Ted Racicot and Joanie Lucas; his great-grandchildren, Tyler, Riley, Wyatt, Hayden, Jacoby, Jayce (born on George’s 88th birthday), Wes, Felix, Brodie, Ella, Quinn, Jude, and Meadow; and many nieces, nephews, grand-nephews and grand-nieces. He was predeceased by his son, Thad, and his siblings, Louise, Charles, Dorothy, Arthur, and Nelson. George graduated from Springfield College and enlisted in the U.S. Army in 1953. He served with the 24th Military Police Company during the Korean Conflict and was honorably discharged in 1955. He was a teacher, coach, and guidance counselor for over thirty-five years at Greenfield Public Schools, before retiring in 1992. George often boasted that his greatest love, other than Nola, was his thirty-three descendants. He loved sharing the family history, dating back to Mary Dyer’s fight for religious freedom, the Rouillards arrival, as POWs, on the U.S.S Constitution, and C.C. Dyer’s brickyard in Greenfield. He and Nola enjoyed gardening, hiking, and collecting thrifty finds. They loved visiting family, national parks, and little-known historic sites off the beaten path, throughout all of the lower forty-eight states. The family would like to extend their heartfelt appreciation for the care and compassion provided by the incredible staff of the Health Center at the Willows at Worcester, Shrewsbury Crossing, and Brookdale at Eddy Pond. Funeral services for George will be private. Those who wish to contribute to George’s memory may consider donating to the Museum of Our Industrial Heritage, 2 Mead Street, Greenfield, MA 01301 (https://industrialhistory.org/p/18/Support-Our-Work), or Hinsdale Historical Society, PO Box 194, Hinsdale, NH 03451. Arrangements are under the care of the Miles Funeral Home, 1158 Main Street, Holden. To share a memory or offer an online condolence, please visit the "Tribute Wall" on this page.

The family of George B. Dyer Jr. created this Life Tributes page to make it easy to share your memories.

Send flowers to the Dyer family.