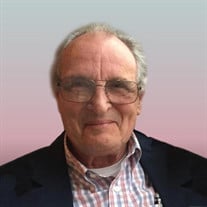 SHREWSBURY- George M. Fotiades, 84 of Shrewsbury passed away Monday, October 11, 2021, after an illness. He touched the lives of countless people during his life and will be deeply missed by family and friends alike. First and foremost George was a devoted family man who cared deeply about his extended family. Along with his siblings and cousins, George organized regular family reunions that kept the Fotiades clan together. In 2001 he traveled to Mytilene where he met the children of his great aunts and uncles that lived near the village of Paleokipos. George was a very active and respected member of the Saint Spyridon Greek Orthodox Cathedral community, both as a parishioner and as a leader. He helped found and run the annual Grecian Festivals, served on the Parish Council, and was as a mentor to generations of church leaders. In 2004, George and Sophia were recognized by the Metropolitan of Boston for their many years of outstanding service to the cathedral. George served on the Board of Directors of Holy Trinity Eastern Orthodox Nursing and Rehabilitation Center in Worcester for many years, in addition to chairing its Building Committee. He could always be found roaming the corridors of the nursing home in an attempt to note improvements that could be made for the benefit of the nursing home clients. Early in his career, George worked as an electrical engineer, most recently at GTE Sylvania. In 1977 George left GTE for the next phase of his professional life as the co-owner of the Webster House restaurant. George founded his company Aegis Security in 1988 and ran it with the help of his wife Sophia until retiring at 82. He helped develop state regulations for the security system profession and served on the Board of the Massachusetts Systems Contractors Association (MSCA) for many years. In 2008 the MSCA recognized his many years of “vision, hard work and dedication” to the industry. George loved to keep active. He climbed many of the highest peaks in the White Mountains and for many years he and a team of fellow climbing enthusiasts climbed Mount Monadnock each winter, braving the snow and ice to make it to the peak. Over the decades his son Michael and grandson George joined him on these winter climbs. George also shared his love of the outdoors more broadly by leading groups of young people from the Cathedral and staff from the Webster House on climbs during the summer. George and Sophia bought their home in Shrewsbury in 1963 and for over half a century they turned the one-time farmhouse into a beautiful and comfortable home. The lawn and gardens were a particular passion for George. George graduated from WPI with a degree in Electrical Engineering in 1959 where he was a member of the Sigma Alpha Epsilon fraternity. He went on to earn a Master’s in Electrical Engineering from Northeastern University in 1964. He also pursued an MBA at Babson College. George is survived by his loving wife of 61 years, Sophia (Peepas) Fotiades, sons Michael and Anestes Fotiades, grandchildren Sage and George Fotiades, and his siblings James Fotiades, Maria Hughes, Andy Fotiades, Peter Shemeth, William Shemeth and Alice Welch. He was predeceased by his parents Michael G. and Marion (Holloway) Fotiades, stepmother Marion (Shemeth) Fotiades, daughter Maria, and siblings Peter Fotiades, Francis Zilko, John Fotiades and Paul Fotiades. Family and friends are invited to visiting hours for George on Friday, October 15th from 4:00-7:00 pm at Miles Funeral Home, 1158 Main Street, Holden, and again from 9:00-10:00 am on Saturday, October 16th at St. Spyridon Greek Orthodox cathedral, 102 Russell Street, Worcester. Funeral services for George will commence immediately thereafter at 10:00 am on Saturday in the Cathedral. Burial will follow in Hope Cemetery, Worcester. The family requests flowers be omitted and contributions in George’s name be made to St. Spyridon Greek Orthodox Cathedral Endowment Fund, 102 Russell Street, Worcester 01609. Arrangements are under the direction of Philip G. Haddad, Jr., Miles Funeral Home, Holden. MAY HIS MEMORY BE ETERNAL To share a memory of offer condolence, please visit the "Tribute Wall" on this page.

SHREWSBURY- George M. Fotiades, 84 of Shrewsbury passed away Monday, October 11, 2021, after an illness. He touched the lives of countless people during his life and will be deeply missed by family and friends alike. First and foremost George... View Obituary & Service Information

The family of George M. Fotiades created this Life Tributes page to make it easy to share your memories.

Send flowers to the Fotiades family.