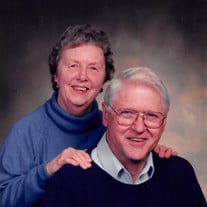 HOLDEN - George N. Blanchard, 90, died on Sept 29, 2020, after a period of declining health at Dodge Park Rest Home in Worcester, where he had resided with his wife of 69 years, Nancy (Amidon) Blanchard. Following a 10 year battle with Alzheimer’s disease, Nancy passed away on July 24, 2020, due to complications caused by Covid-19. George and Nancy had resided in Holden for more than 60 years prior to moving to Dodge Park in 2014. They were both very active in their church, and in numerous organizations in Holden. Over the years, George was a sales Representative for Commonwealth Press, J. S. Wesby & Sons, Inc. in Worcester, and Acme Bookbinding in Medford. Later in his career, he worked as caretaker for his beloved United Church of Christ in Worcester, until his retirement. George was born in Worcester on July 3, 1930, the son of Leon H. and Hazel (Brooks) Blanchard and was predeceased by a brother, Leon H. Blanchard Jr.; and 2 sisters, Helen B. Krause, and Marion B. Stratton. Nancy was born in Worcester on July 18, 1929, the daughter of Charles H. and Elizabeth (Elkins) Amidon. She was predeceased by 4 brothers, Charles, Alan, Curtis, and Richard Amidon; and 2 sisters, Virginia A. Barber and Patricia A. Johnson. They leave 3 children, Curtis N. Blanchard and his wife, Allison of Nashua NH, Jane B. Plant, wife of the late, Richard Plant of Franklin and Andrew S. Blanchard and his wife, Ellen of Conway, NH. They also leave 6 grandchildren; 9 great grandchildren; and a loving extended family numbering in the hundreds. A private graveside service will be held at Worcester County Memorial Park in Paxton at the family’s convenience. In lieu of flowers, donations can be made, in their memory, to the Memorial Fund of United Congregational Church, UCC, 6 Institute Rd, Worcester, MA 01609, or to the Alzheimer’s Association, 309 Waverly Oaks Road, Waltham, MA 02452. Arrangements are under the care of the Miles Funeral Home, 1158 Main Street, Holden. To share a memory or offer an online condolence, please visit the "Tribute Wall" on this page.

HOLDEN - George N. Blanchard, 90, died on Sept 29, 2020, after a period of declining health at Dodge Park Rest Home in Worcester, where he had resided with his wife of 69 years, Nancy (Amidon) Blanchard. Following a 10 year battle with Alzheimer&#8217;s... View Obituary & Service Information

The family of George N. & Nancy (Amidon) Blanchard created this Life Tributes page to make it easy to share your memories.

Send flowers to the Blanchard family.