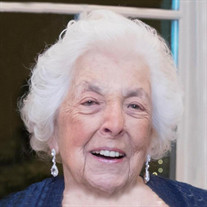 WORCESTER - Geraldine (Gerry) Angelos, age 96, passed away on Monday, June 7, 2021, after a long and fruitful life. Gerry was preceded in death by her husband, James, of 61 years, sister Charlotte Listro and parents William and Helen Smith. She is survived by her three daughters; Laurel Westreich (Henry), Kathleen Pinkett (Darwin Barker), and Teresa Mazeika (James). She was adored by her grandchildren Nicole Pinkett, Joshua Westreich (Jaclyn), James Pinkett, Dylan Mazeika, Maxine Mazeika and Adrienne Mazeika; her great-grandchildren Jiana, Marcus, Nyah, Juliette and Jordan; and great-great-granddaughter Indigo. Gerry was born in Meridan, CT on February 11, 1925, the eldest of two daughters. She worked at Connecticut Mutual in the claims area and, upon her marriage to her husband, relocated to New York City and lived there for 32 years, raising her daughters and being an active volunteer. Gerry served the Ladies Auxiliary of the American Legion, Post 263, as President and Past President. She was also a long-term Leader of her local Girl Scout Troop, earning many awards for her mentoring of young girls. In 1980, Gerry and her family moved to Massachusetts where Gerry became an active volunteer as Chaplin for both the American Legion Auxiliary Post 122 and St. Lucy’s Ladies Auxiliary in Methuen. Gerry was an avid bowler, participating in many state and national tournaments up to age 94. She also enjoyed candle-pin bowling. Gerry recently had become a resident of Colony III Apartments where she served on the Residents’ Board and maintained the community library. Visitation will be held on Saturday, June 12 at 9:30 am at Kelly Funeral Home, 154 Lincoln Street, Worcester. Funeral Mass to follow will be at 11 am at Immaculate Conception Church, 353 Grove Street, Worcester. Donations in memory of Gerry may be made to Massachusetts Veterans Inc., 69 Grove Street, Worcester MA 01605, www.veteransinc.org or to Mustard Seed Food Pantry, P.O. Box 2592, Worcester MA 01613, mustardseedcw.org

WORCESTER - Geraldine (Gerry) Angelos, age 96, passed away on Monday, June 7, 2021, after a long and fruitful life. Gerry was preceded in death by her husband, James, of 61 years, sister Charlotte Listro and parents William and Helen Smith.... View Obituary & Service Information

The family of Geraldine "Gerry" M. Angelos created this Life Tributes page to make it easy to share your memories.

Send flowers to the Angelos family.