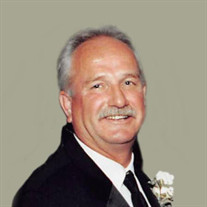 HOLDEN - Glenn A. Berry, age 64, passed away peacefully at home on Saturday, January 30, 2021 after a long battle with cancer. Born in Worcester, one of 17 children to Harold and Loretta (Adamiak) Berry. Glenn graduated with the first graduating class at Bay Path Regional Vocational Technical High School in Charlton. He worked for over 30 years as a Truck Driver for Atlas Distributers and was a member of Teamsters Local 170. He married the love of his life, Teresa L. DiCesare, and raised their family in Holden, where he lived for the rest of his life. Family was very important to him. No matter what sport it was, Glenn made sure to never miss one of his children’s or grandchildren’s games. Glenn felt at home being outdoors. He could be found happily trailing through the woods behind his home, fishing with his grandchildren or canoeing across Chaffin Pond. He will be lovingly missed by his wife of 43 years, Teresa L. (DiCesare) Berry; his son, Ryan A. Berry and his wife, Kristi of Holden; three brothers, William Berry and his wife, Cynthia of CT, Kenneth Berry of WA and Ronald Berry and his wife, Maila of Rutland; 7 sisters, Deborah Ashford of Holden, Louann Kustak and her husband, Michael of Webster, Jacqueline Rucci of Auburn, Diane Smith of Webster, Laurie Falknenburg and her husband, Douglas of NY, Jennifer Quigley and her husband, Christopher of Oxford and Jessica Bristol of Millbury; six grandchildren, Olivia, Lili, Ty, Blake, Reese and Cain; and many nephews and nieces. Glenn was predeceased by his daughter, Leah Berry; four brothers, Michael, Jeffrey, Gregory and John; two sisters, Cathy and Gayle; and by his brother-in-law, Dana. Relatives and friends are invited to calling hours from 5:00 to 7:00 pm on Friday, February 5, 2021 at Miles Funeral Home, 1158 Main St., Holden. A Mass of Christian Burial honoring his life will take place at 11:00 am on Saturday, February 6 at St. Mary’s Church, 114 Princeton St., Jefferson. His burial will follow immediately after the service at Worcester County Memorial Park, 217 Richards Avenue, Paxton. In lieu of flowers, memorial donations may be made to Why Me and Sherry’s House at: https://whyme.org/get-involved/donate/. Funeral arrangements are under the care of Miles Funeral Home, Greater Worcester Funeral Care. To share a memory or offer a condolence please visit "The Tribute Wall."

HOLDEN - Glenn A. Berry, age 64, passed away peacefully at home on Saturday, January 30, 2021 after a long battle with cancer. Born in Worcester, one of 17 children to Harold and Loretta (Adamiak) Berry. Glenn graduated with the first graduating... View Obituary & Service Information

The family of Glenn A. Berry created this Life Tributes page to make it easy to share your memories.

Send flowers to the Berry family.