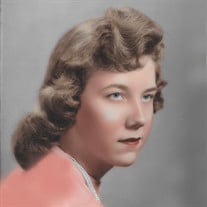 WORCESTER – Grace (Betty) E. Mott, age 82, passed away peacefully on Saturday, December 12 at St. Vincent Hospital in Worcester. Born in Worcester, the daughter of Pehr and Grace (Carlson) Jacobson, she grew up in Millbury, later moved to Holden, then Rutland. She will be lovingly missed by her daughter, Jayne Nickel Waldman and her husband, David of Bedford, NH; her son, Christopher Mott of Rutland; and her grandson, Daniel Waldman of Brooklyn, NY. She was predeceased by her son, Jon Nickel, and her brother, Jon Jacobson. Grace will be remembered for her keen sense of humor, sharp wit, and time enjoyed with her family and her few cherished friends. She worked for several years at Reed Rico in Holden, following years as a clerk at Honey Farms in Rutland. She enjoyed her daily newspaper, doing crossword and jigsaw puzzles, crocheting, and embroidery, and was an avid Scrabble player. A funeral service honoring her life will be held privately. In lieu of flowers, memorial donations in her name may be made to a charity of one’s choice. Funeral arrangements are under the care of Miles Funeral Home, Greater Worcester Funeral Care.

The family of Grace E. (Jacobson) Mott created this Life Tributes page to make it easy to share your memories.

Send flowers to the Mott family.