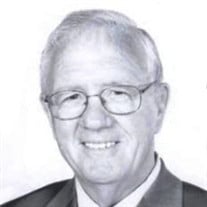 Hal's funeral service will be live streamed on Friday, August 28 at 10:00 am on the First Church of Sterling's FaceBook Page: https://www.facebook.com/FirstChurchSterling/ HOLDEN - Harold “Hal” M. Lane, Jr., passed away peacefully at the Rose Monahan Hospice House in Worcester on August 22, 2020, just shy of his 82nd birthday. He was born in Philadelphia, Pennsylvania on August 24, 1938, the eldest son of Harold M. and Marie L. (Lionett) Lane. He has called Holden his home from the time he was a teenager. Hal graduated from the new Wachusett Regional High School (WRHS) in 1956 and went on to earn his bachelor’s in history from UMass Amherst in 1960. Subsequently, he earned a master’s degree in secondary education from Clark University in Worcester. He started his long career in education as a history teacher at West Boylston Junior/Senior High School. At the urging of his mentor and lifelong friend, Frank Lepore, he later became a guidance counselor. This led to his landing the newly created director of secondary education position at Wachusett in 1970. He became assistant principal, and then led the school as principal for 20 years, retiring in 1993 – the year following the passing of his beloved wife. Looking for another avenue in which to improve public education and serve the community, he became the state representative for the 1st Worcester District in a 1994 special election and held the seat for six years. At the time he left the State House, he was the Chairman of the Joint Committee on Education, Arts, and Humanities. He then served two years as the executive director of the non-profit Alliance for Education. Hal reprised his role as interim WRHS principal for a year in 2006 during a major building renovation. In 2008, he was thrilled when “Hal Lane” field was named in his honor. He was profoundly proud of the teachers he worked with and every student who walked the halls of the school and thoroughly enjoyed each moment of his long tenure at Wachusett. His public service also included several years as Holden town moderator and membership on the safety building committee. Hal was a long time member, and past president, of the Wachusett Area Rotary Club. He was a proud UMass Amherst alum and it pleased him to serve the university as president of the UMass Alumni Association from 2004 – 2006. Hal loved to read, and he looked forward to annual vacations in Wells, Maine. Another passion was baseball. He was a true Red Sox fan and thought Ted Williams was the greatest player. He managed to visit many of the major league ballparks during his retirement and often brought family members with him. Hal was entranced with the magic of Disney, and for as long as he was able, he brought one or two grandchildren to Disney World each year to share in the wonder of the experience. He fulfilled a personal dream when he worked the Buzz Lightyear exhibit for several months in 2005. Above all else, he felt his most significant and enduring life achievement is his family, which began in 1960 when he married his high school sweetheart and true love of his life, Dorothy “Dottie” E. Mayo, who predeceased him in 1992. Together they had eight children, who benefited from all the love, guidance, and support both had to offer. He is lovingly missed by his children and their spouses: Roy and Laurie Lane of Sterling; Catherine Nicastro of Ashburnham; Christine and Mark Adams of Rochester, NY; Gary and Theresa Lane of Orleans; James and Diane Lane of Paxton; Jeffrey and Sheila Lane of Shrewsbury; Cheryl and Kirk Preston of Rochester, NY; and Cynthia and Stephen Kitchen of Rehoboth. Each of his thirty-one grandchildren has cherished memories of “Papa”, and he had the pleasure of being introduced to each of his ten great-grandchildren. Hal leaves behind his two brothers and sister: William and Frances Lane of Cape Cod; Charles and Jean Lane of Gardner; and Ruth and Doug Briggs of Rutland. He will also be missed by Linda Lane, wife of his brother Robert of Medford, NJ, who predeceased him in 2004. Those who will remember their Uncle Hal at family gatherings include many nieces and nephews. His faith was important to him since his youth when he attended church with his beloved grandfather, Harry J. Lionett. The First Congregational Church of Holden was Hal’s spiritual home. He was married in the church, all his children were baptized there, and Dottie’s life was celebrated there. He served the church in many ways, including as a deacon. For the past few years, he enjoyed attending church with his eldest son Roy in Sterling. There is an opportunity for relatives and friends to honor Hal and visit with the family from 4:00-7:00 pm on Thursday, August 27th at Miles Funeral Home, 1158 Main Street, Holden. Appropriate face coverings must be worn, and social distancing must be honored. Due to the restrictions of COVID-19, a celebration of his life will be held privately on Friday, August 28th with the Reverend Robin Bartlett of the First Church in Sterling officiating. Burial will follow at a later date at Grove Cemetery in Holden. Hal’s family would love those of you who are unable to attend his service and want to celebrate his life to join in spirit by watching the live streaming of his Friday service in the comfort of your home. Please go to Miles Funeral Home's web site, click on Hal’s obituary, and click on the appropriate link. The video will be available for viewing for 90 days following his service. If you would like to honor Hal's life and legacy by sending a gift, instead of flowers, the family encourages you to donate to The Hal Lane, Jr. Scholarship Fund. Please make checks payable to WRSD and mail them to Wachusett Regional High School, 1401 Main Street, Holden, MA 01520. To offer a condolence or to share a memory please visit the "Tribute Wall" on this page.

The family of Harold M. Lane, Jr. created this Life Tributes page to make it easy to share your memories.

Hal&#39;s funeral service will be live streamed on Friday, August...