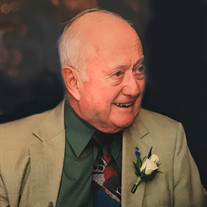 PAXTON - Harold "Buzzy" J. Mullaney, 89, loving husband, father, grandfather, great-grandfather, brother, uncle and friend to many, passed away peacefully at his home in Paxton on Wednesday, April 7, 2021. Born in Worcester, he was the son of the late Augustus P. and Doris C. (Green) Mullaney and lived most of his life in Paxton. Buzzy spent his early years in Worcester before moving to Paxton. After graduating from North High School in Worcester, he honorably served his country during the Korean War in the U.S. Navy aboard the aircraft carrier, the USS Tarawa. After his return, he began his career at Heald Machine Co. in Worcester, and it was there where he met the love of his life, Florence R. Kobel. Buzzy also worked simultaneously for over 20 years at the Paxton Police Department, eventually becoming a Sergeant. A well-respected man in the community, Buzzy was very active in town politics in both Paxton and Petersham, where he lived for over 20 years before moving back to Paxton. Amongst many organizations, he was a member of the Paxton Board of Selectman, American Legion Post 306 in Paxton and Southern Mass Police Association. He was an avid hunter, fisherman and loved going out in his boat on the Quabbin Reservoir. He will be lovingly missed by his wife of 64 years, Florence R. (Kobel) Mullaney; three daughters, Donna M. Griffin of North Brookfield, Sheila A. Ducharme of Worcester, Rosemary J. Warren and her husband, David of Paxton; a son, Patrick H. Mullaney and his wife, Kelly of Mesa, AZ; a brother, Gerald A. Mullaney and his wife, Beverly of Madbury, NH; a sister, Dorisanne Marengo of Worcester; twelve grandchildren; seven great-grandchildren; and many nephews and nieces. He is predeceased by two brothers, Paul A. Mullaney and Richard C. Mullaney, and two sisters, Patricia M. Ranta and Clare Mullaney. Relatives and friends are invited to visit with Buzzy's family from 4:00 to 7:00 pm on Friday, April 9 at Miles Funeral Home, 1158 Main St., Holden. A Mass of Christian Burial will take place on Saturday, April 10 at 10 am at St. Columba Parish, 10 Richards Ave., Paxton. Burial will follow at Mooreland Cemetery in Paxton. In lieu of flowers, memorial donations may be made to St. Columba Parish Special Projects, 10 Richard's Ave., Paxton, MA 01612. Funeral arrangements are under the care of Miles Funeral Home, 1158 Main. St., Holden. To share a memory or to offer an online condolence, please visit the "Tribute Wall" on this page.

PAXTON - Harold "Buzzy" J. Mullaney, 89, loving husband, father, grandfather, great-grandfather, brother, uncle and friend to many, passed away peacefully at his home in Paxton on Wednesday, April 7, 2021. Born in Worcester, he was the son of... View Obituary & Service Information

The family of Harold "Buzzy" J. Mullaney created this Life Tributes page to make it easy to share your memories.

Send flowers to the Mullaney family.