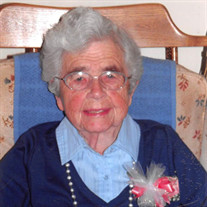 NORTH BROOKFIELD – Harriet E. (Shephard) Hubacz, 98, passed away on Monday, May 30, 2022, at Brookhaven Assisted Living in West Brookfield after an illness. She was born in Princeton, the daughter of Lucius and Harriet (Wilson) Shephard and had lived on the family farm which is now the site of the Thomas Prince Elementary School. She lived in North Brookfield and resided a few years with her daughter, Louise in West Brookfield before moving to Brookhaven. Her loving husband of over 50 years, Paul F. Hubacz, passed away in 2006. She leaves her two children, Louise Byczek of West Brookfield, and Paul J. Hubacz of North Brookfield; four grandchildren, Adam, Jenna, Ross Hubacz, and Jacob Byczek; and two great-grandchildren, Charlotte Hubacz and Joseph Barton. Harriet was the first woman in Central Mass to hold a dynamiters license which she utilized while working with her father clearing the way for construction of many roads and highways. Later, she became a registered nurse completing her training at Leominster and Boston City Hospital’s. She worked for many years at Holden Hospital and Quaboag Nursing and Rehabilitation in West Brookfield. She worked on the Hubacz Family Farm and as tiny as she was, she helped around the farm by driving farm equipment, tending the gardens, and canning fruit and vegetables for her family. She was proud knowing her father, Lucius graduated from the University of Massachusetts in Amherst as did many of her family members following in his footsteps, including her grandson, Ross. In her leisure, Harriet enjoyed knitting, playing cards, music, and spending time with her family in Vermont. Harriet and her family wish to thank and acknowledge the attentive care Harriet received from the staff at Brookhaven Assisted Living where she resided for the past few years. She often mentioned how happy she was living there. She said it was a “loving place”. We are especially grateful to Laura O’Donnell for her attention to Harriet’s personal and medical needs. We also would like to express our appreciation to the staff of Brookhaven Hospice. A private graveside service will be held at Walnut Grove Cemetery in North Brookfield. There are no calling hours. Funeral arrangements are under the care of the Miles Funeral Home, 1158 Main Street, Holden. To share a memory or offer an online condolence, please visit our "Tribute Wall"

NORTH BROOKFIELD &#8211; Harriet E. (Shephard) Hubacz, 98, passed away on Monday, May 30, 2022, at Brookhaven Assisted Living in West Brookfield after an illness. She was born in Princeton, the daughter of Lucius and Harriet (Wilson) Shephard... View Obituary & Service Information

The family of Harriet E. (Shephard) Hubacz created this Life Tributes page to make it easy to share your memories.

Send flowers to the Hubacz family.