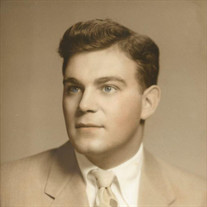 HOLDEN - Harvey H. Hartleb, Jr. passed away peacefully at his home on November 9, 2020 in the loving care of his family. Harvey was born on October 10, 1931 in Brunswick, Maine. He was the oldest son of Elizabeth (McGuiggan) and Harvey Hartleb, Sr. Raised in Bath, Maine he graduated from Morse High School class of 1949. He earned an accounting diploma from Burdett College, Boston, a Bachelor of Business Administration from Clark University, Worcester, and a Master of Arts in Teaching from Assumption College, Worcester. His college was interrupted to serve in the U.S. Army, where he was stationed in Garmisch-Partenkirchen, Germany. He made lasting friendships while there. Harvey worked at Norton Company for 30 years in the field of Industrial Engineering. It was there that he met his wife of 56 years, Marcia (Ostergard). Together they were active in the Norton Ski Club and shared many fond memories of this with their children. Harvey later worked and retired from Westborough State Hospital. A talented and humble man, Harvey’s home is adorned with many of his wood carvings and surrounded by the stone wall he built and perfected over the years. Together with his family he enjoyed camping and spent many vacations in Vermont. He had a true love of Maine and the family cottage in Phippsburg, summering there until unable to travel this past season. Harvey is survived by his wife Marcia and three children: Heather Dubrule and her husband Steve of Holden, Meredith Hartleb of West Boylston, and Ross Hartleb of Culver City, California. He also leaves four grandchildren: Samuel, Charles, and Elise Dubrule, and Thompsen Hartleb. He was predeceased by his brother Dr. John Hartleb. Harvey was a member of Greendale Peoples Church and a life member of the Bath Elks club. Contributions in his memory may be made to either: Greendale Peoples Church, 25 Francis St., Worcester, MA 01606 or Bath Elks Lodge #0934, PO Box 334, Bath, ME 04530. Family and close friends will gather for a private graveside service at High Plains Cemetery, West Boylston. Funeral arrangements are under the care of Miles Funeral Home, Greater Worcester Funeral Care. To share a memory or to offer an online condolence, please visit the "Tribute Wall" on this page.

HOLDEN - Harvey H. Hartleb, Jr. passed away peacefully at his home on November 9, 2020 in the loving care of his family. Harvey was born on October 10, 1931 in Brunswick, Maine. He was the oldest son of Elizabeth (McGuiggan) and Harvey Hartleb,... View Obituary & Service Information

The family of Harvey H. Hartleb, Jr. created this Life Tributes page to make it easy to share your memories.

HOLDEN - Harvey H. Hartleb, Jr. passed away peacefully at his...