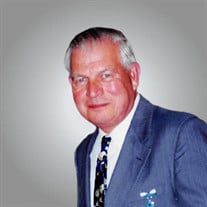 PAXTON - Henry E. Hirvi, 90, of Paxton, died peacefully on Sunday, February 28, 2021, at Holy Trinity Nursing and Rehabilitation Center, Worcester. He leaves his daughter, Ann Gwyther and her husband, John of Rutland; three grandchildren, Lindsay Gwyther (Gil), Tracy Hookway (Steve) and Phil Gwyther (Rachel); as well as two nieces and their families. Henry's wife, Eva (Rantala) passed away in 2018. They had celebrated 64 years of marriage. His son, Steven, his sister, Sylvia Burnap, a niece and a nephew predeceased him. Henry was born in Fitchburg to the late Isaac and Olga (Koukkari) Hirvi. He grew up in Fitchburg and was educated in the Fitchburg Schools. He is a graduate of Tufts University. Henry proudly served in the U.S. Navy as Lieutenant Commander aboard the USS Monterey and the USS Northampton during the Korean Era. He also served in the Naval Reserves. Henry went on to work in the field of electrical engineering for several companies including Heald Machine Co., Norton Co. and Kanzaki Specialty Papers. He and his wife raised their family in Paxton and lived there for over 50 years. Henry was very involved in the Finnish Community in Central MA and beyond. He was a member of the Finnish Center of Saima Park in Fitchburg and the Finnish Heritage Society Sovittaja in Rutland, and others. He was President of the FinnFest USA 1998 Festival in Gorham, ME. Henry very much enjoyed traveling, especially to Finland through the years and took many trips there with his wife. He also enjoyed his many experiences in his working career and his work assignment to Australia was particularly memorable. His grandchildren meant the world to him and he and his wife exposed them as much as possible to their Finnish heritage and educational experiences. Henry also enjoyed time spent at his summer cottage in Rutland with his family and friends. Henry was a member of the former Faith Lutheran Church and Zion Lutheran Church, both in Worcester. Henry will be missed by all those that loved him. The family would like to thank all the staff at Holy Trinity for their caring and compassion. Relatives and friends are invited to attend a memorial service honoring and celebrating Henry's life at 11 a.m. on Saturday, June 26, 2021 at Sovittaja Park, 43 Finn Park Road, Rutland. Please follow current CDC guidelines while attending the service. In lieu of flowers, please consider sending a donation to Finnish Center at Saima Park, P.O. Box 30, Fitchburg, MA 01420. Arrangements are under the care of Miles Funeral Home, 1158 Main St., Holden. To share a memory or to offer an online condolence, please visit the "Tribute Wall" on this page.

The family of Henry E. Hirvi created this Life Tributes page to make it easy to share your memories.

Send flowers to the Hirvi family.