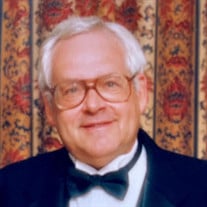 The Funeral Service for Howard M. Gordon will be livestreamed on Sunday, November 14, 2021 at 10:00am via the following link: https://client.tribucast.com/tcid/1473234009 WORCESTER / ST. PETERSBURG - Howard M. Gordon, 79, of St. Petersburg, FL, formerly of Worcester, died on November 10, 2021. Born in Worcester, Howard grew up on Vernon Hill. He was a graduate of Classical High School and earned a BA from Clark University. Known as “Howie” to friends and family, he founded Astro Cleaning Systems, Inc. in the early 1970s, providing commercial cleaning services for local office buildings, manufacturing facilities and places of business. In later years he specialized in post-construction cleanup services, supplying the finishing touches for newly-built retail stores and schools. Howie had a sharp wit combined with a big heart. He may have been the world’s first Tampa Bay (Devil) Rays fan. He was passionate about baseball history and grew up attending Boston Braves and Red Sox games. He was a rock-and-roll fan from the time he saw Elvis debut on Jackie Gleason’s “Stage Show” in 1956. He had a love for “the ponies,” and enjoyed watching races in person and online. Howie enjoyed visiting with his “breakfast club” at The Broadway and other early-morning dining spots. Howie was a longtime member of the former Temple Emanuel and was a past-president and “Man of the Year” of the Temple Brotherhood. He was a long-time member of Probus and Holden Towers Tennis Club. A son of the late Leo Z. and Mary (Shulman) Gordon and brother of the late Bennett S. Gordon, he leaves his wife of 57 years, Janet (Plotkin) Gordon, three children, Jay Gordon (Bonnie) of Natick, Lisa Schneider of Dunedin, FL and Elana Gordon of St. Petersburg, as well as his beloved granddaughters Mara Gordon of New York City and Hallie Gordon of Natick. A Graveside Funeral Service will be held at 10:00 AM on Sunday, November 14, at B’nai Brith Cemetery, 55 St. John’s Road, Worcester. Arrangements are under the care of Miles Funeral Home of Holden. Memorial Donations may be made to a charity of the donor’s choice.

The family of Howard M. Gordon created this Life Tributes page to make it easy to share your memories.

The Funeral Service for Howard M. Gordon will be livestreamed...

Send flowers to the Gordon family.