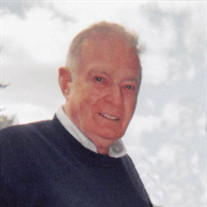 RUTLAND – James A. Burnett, 87, passed away peacefully at home on Friday, October 8, 2021 after an illness. He leaves his loving wife of 64 years, Joyce M. (Wilkinson) Burnett; his daughters, Robin Congdon and her husband, Donald of Rutland and Kristin L. Nadeau and her husband, Michael of Athol; his grandchildren, Jamie, Lindsay, Kaylin, Drew, Breanna, Tyler and Marissa; eight great-grandchildren with one on the way; and several nieces and nephews. James was born in Los Angeles, CA, the son of Robert and Mary (Hagen) Burnett and was raised by his foster parents, Edward and Catherine Cunningham in Rutland. He graduated from Rutland High School and enlisted into the service where he proudly served his country with the U.S. Marine Corps during the Korean Conflict. Following his honorable discharge, he continued his education and attended Worcester Junior College and earned his Associate’s degree. James worked at Norton Company as a Complaint Investigator for over 30 years before retiring. In the early years, James enjoyed camping with his family and going fishing at Demond Pond with his brother-in-law, Sonny. Later in life, he enjoyed cookouts, especially his cookout after the Rutland 4th of July Parade, and trips to Foxwoods with Joyce and his sister-in-law, Helen. At Jim’s request, Funeral services are private and will be held at the convenience of the family at Rural Cemetery in Rutland. In lieu of flowers, memorial contributions may be made to the Rutland 4th of July Committee, Gifts Accounts, 250 Main Street, Rutland, MA 01543. Arrangements are under the care of the Miles Funeral Home, 1158 Main Street, Holden. To share a memory or offer an online condolence, please visit our "Tribute Wall" on this page.

RUTLAND &#8211; James A. Burnett, 87, passed away peacefully at home on Friday, October 8, 2021 after an illness. He leaves his loving wife of 64 years, Joyce M. (Wilkinson) Burnett; his daughters, Robin Congdon and her husband, Donald of Rutland... View Obituary & Service Information

The family of James A. Burnett created this Life Tributes page to make it easy to share your memories.

RUTLAND – James A. Burnett, 87, passed away peacefully at home...

Send flowers to the Burnett family.