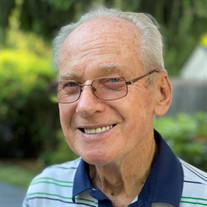 *Services for Jim & Shirley have been postponed to a later date.* HOLDEN - James Curtis Patch, Sr. (Jim) passed quietly on Wednesday, June 9, 2021, surrounded by loved ones. He was born in 1932 in Worcester, MA the son of Frederick and Athalie Patch. He grew up attending Wesley Methodist Church where he met a talented young pianist named Shirley Lou Covert. They were married in 1952 and celebrated 68 years of marriage before Shirley’s death in 2020. Jim and Shirley were also beloved members of the First Congregational Church of West Boylston, MA for over 20 years. Jim is survived by three sons – James Patch, Jr and his wife Tina of Pepperell, MA, Mark Patch and Hannah Pham of San Jose, CA, and Jeff Patch and his wife Sue of Holliston, MA. He found each of his eight grandchildren and four great-grandchildren a great source of joy and loved them dearly. He and Shirley were loving parental figures in the lives of their nieces, nephews, and extended “adopted” family. It was common for family friends to refer to them both as Mom and Dad Patch. He was acknowledged by many for delivering “the best hugs”. He was well-loved and will be sorely missed. Jim’s working life began in 1951 in the US Army as part of the occupational troops in Germany during the Korean War. He was recommended for Officers Candidate School and served honorably until 1953. Upon his return, he worked for his brother-in-law at Dellwood Decorating Supplies in Worcester eventually purchasing the business which he operated until 1977. A second career began for Jim as a salesman of industrial paper goods at Butler-Dearden Paper Service in West Boylston, MA. He was quite successful and well-liked by customers and co-workers alike. He retired in 2002. Throughout his life, Jim was the definition of a “DIY” (Do It Yourself) guy. We suspect his picture should appear in the dictionary next to the definition. He constantly painted, constructed, wired, plumbed, landscaped, built, gardened, mowed, raked, cut, split, and stacked – and loved every minute of it. Jim found much of this type of work “play”. Jim enjoyed simple pleasures – sitting on his deck overlooking a beautifully manicured lawn, dinners with family, fishing, watching the Red Sox, and, on snowy winter mornings, enjoying a cup of coffee by the warmth of his woodstove. A celebration of both Jim and Shirley’s lives will be held at a later date. In lieu of flowers, the family requests donations to the Wounded Warrior Project online at www.WoundedWarriorProject.org. To share a memory or to offer an online condolence, please visit the "Tribute Wall" on this page.

*Services for Jim & Shirley have been postponed to a later date.* HOLDEN - James Curtis Patch, Sr. (Jim) passed quietly on Wednesday, June 9, 2021, surrounded by loved ones. He was born in 1932 in Worcester, MA the son of Frederick and Athalie... View Obituary & Service Information

The family of James Curtis Patch, Sr. created this Life Tributes page to make it easy to share your memories.

*Services for Jim &amp; Shirley have been postponed to a later date.*